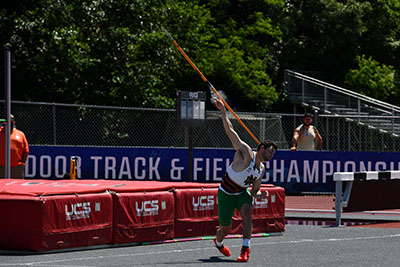 At the Atlantic Coast Conference (ACC) Outdoor Track & Field Championships, held in Raleigh, North Carolina from May 13–15, former Big Blue thrower Austin Parsons '18, a sophomore at Notre Dame, broke the school's javelin record. His mark of 230'5", a personal best by nearly nine feet, improved upon the Irish's previous record of 222'67", which had stood for 30 years. The throw also earned him a second-place finish—just four feet shy of gold—at one of the most competitive meets in the country.

A three-sport athlete at Pingry, Austin competed on the Varsity Football Team for two years, the Boys' Varsity Ice Hockey Team for four years, and was a four-year member of the Boys' Varsity Track & Field Team. He capped his high school throwing career with a second-place finish (195'6") at the 2018 Meet of Champions and a #3 state ranking. Equally talented on the ice, Austin was also named a High School Player of the month his senior year by the New Jersey Devils. 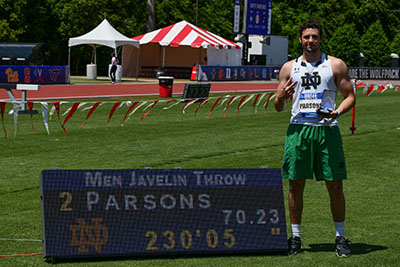 Austin's performance at the ACC Championships qualifies him for the NCAA East Preliminary this week at the University of North Florida, and the opportunity to advance to the famed NCAA Championships in Oregon next month.