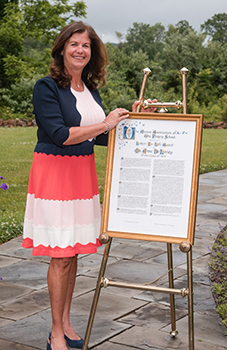 The Alumni Association of The Pingry School presents this Letter-In-Life Award to Ms. Anne DeLaney of the Class of 1979.

Anne DeLaney is a licensed clinical social worker and partner of DeLaney Psychotherapy. Driven by her own experiences with grief, she has spent the last 30 years providing grief-counseling services to individuals and families in northern New Jersey. Her work in the service of mental health has had a profound impact in reducing the stigma both at Pingry and around the globe.

Ms. DeLaney joined Pingry as a freshman shortly after the School became fully co-educational. She started women’s track at Pingry and played varsity field hockey, captained both teams, and won the Union County Scholar-Athlete Award. She was the only female officer in her graduating class. After Pingry she would graduate from Connecticut College in 1983 with majors in Sociology, English, and American History, earn her MSW from the NYU School of Social Work in 1988, and embark on a lifetime career of counseling and volunteering.

Ms. DeLaney met her husband, Chip Carver ’77, at Pingry. The couple have four children, all Pingry “lifers”: Emma Akins ’09, Chloe ’11, Reeve ’14, and Sean ’14. The family partnered with Pingry for service trips to South Africa with the Global Literacy Project; between 2007 and 2013, Pingry students and teachers delivered over 350,000 books, created several libraries, and renovated numerous school classrooms, bringing hope to those who need it most by giving them the opportunity to read a book for the first time–profoundly changing the lives of both recipients and donors.

With another Pingry parent, Leigh Porges, Ms. DeLaney founded OneGift, the nation’s first wish fulfillment program for adults with cancer. With over 3,600 wishes granted, the organization brought hope, solace, and joy to cancer patients and their families. Ms. DeLaney is a founding member of the International Advisory Board of Columbia University’s Global Mental Health Programs, which partners with programs around the world to reduce mental health stigma and advance treatment.

Ms. DeLaney has been an active volunteer and champion for Collaborative Support Programs of NJ (CSPNJ) for over seven years. The lived experiences of peer leaders form a core component of their mission to promote the wellness and recovery of people facing behavioral health challenges, substance use issues, and homelessness. She has been heavily involved as an Advisor and Chair of the External Affairs Committee and is a leader in CSPNJ’s philanthropic efforts, giving generously of her time, resources, and expertise. She also partners with Freedom House, which provides peer-led recovery services to people struggling with substance abuse and addiction. She and her sister, Mary Beth Hahn, co-chair the Family Afterward Program, which provides women in recovery and their children the support they need to heal and bond as a family.

Ms. DeLaney has had a profound impact at Pingry as well. She has served two terms on the Board of Trustees (1994-2009, 2014-2020), was a member of the Steering Committee for Pingry’s 150th Anniversary celebration, and has volunteered at Career Day and for The Pingry Fund. She earned the Cyril and Beatrice Baldwin Pingry Family Citizen Award in 2009.  Believing in the value of athletics for young women, Ms. DeLaney and Mr. Carver established the Carver/DeLaney Baseball and Field Hockey Endowment Fund, and during the Blueprint for the Future campaign they furnished and refurbished Pingry’s softball fields, which now bear their names. They also supported the construction of the Middle School, and tuition assistance through the Theodore M. Corvino, Sr. Scholarship Endowment Fund. The Carver family, including Ms. DeLaney, created the Gilbert Harry Carver ’79 Memorial Fund, which promotes open dialogue on topics such as self-esteem, acceptance, and avoiding illegal drug and alcohol use. Ms. DeLaney is generous with her time not only as a volunteer but as a professional; she helps to counsel students and other members of the Pingry community during times of difficulty.

Through her philanthropy, career in social work, and diligent efforts to reduce the stigma around mental health disorders, both at home and around the world, Anne DeLaney has earned distinction. Through this distinction, she has brought honor to The Pingry School.