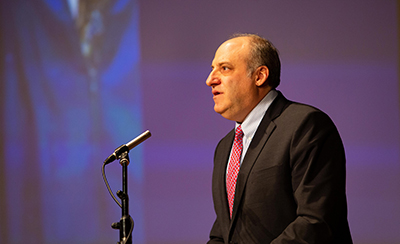 Andrew Goldstein '92, a TIME magazine investigative reporter-turned-prominent federal prosecutor, is known for tackling some of the most high-profile public corruption cases in New York City. Most recently, he served as Senior Assistant Special Counsel in the Mueller investigation, service he has called "the privilege of a lifetime." In a front page New York Times profile of him last winter, the headline laid bare the very esteem he shies away from: "It's Mueller's Investigation. But Right Behind Him Is Andrew Goldstein." Perhaps no speaker could be better suited to address Pingry students, faculty, and staff at the annual John Hanly Lecture on Ethics and Morality. That he returned to the Basking Ridge Campus* on November 8 to do just that speaks to the passion Mr. Goldstein holds for his work—bringing the facts, the truth, to life—and his commitment to Pingry.

It was not Mr. Goldstein's first time addressing Pingry students. From 1996-1999, just after his graduation from Princeton and at the invitation of then-Headmaster Mr. Hanly, he returned to Pingry to teach World Cultures and AP Government and, for the 1998-99 school year, served as Dean of Students. His return was driven, in part, by a desire to honor the legacy of one of his most influential Pingry teachers, Joe LaValley, who died his senior year at Princeton and left vacant the AP Government class Mr. Hanly encouraged him to fill.

"What was special about John Hanly," Mr. Goldstein told Middle and Upper School students, "was his belief that a school must teach character as much as it teaches academics. He gave life to the Honor Code."

After moving on from his teaching role at Pingry, Mr. Goldstein reported for TIME and attended Yale Law School before eventually rising to Chief of the Public Corruption Unit at the U.S. Attorney's Office for the Southern District of New York. After serving under Robert Mueller III in the Department of Justice's Russia investigation, he recently joined Cooley LLP as a litigation partner.

He drew on these career experiences to share his perspective on the Honor Code, which he referred to as Pingry's "secret sauce." "It's what makes Pingry more than just another prep school with an admittedly gorgeous campus. The Honor Code doesn't prevent kids from cheating and plagiarizing—in fact, you could argue it makes those problems potentially worse—but it gives students the tools and incentives to make the right decisions. It's on you, there's nobody watching you," he said. Or, as he phrased it later in the lecture, "Following a rule so you don't get in trouble is different than making a decision to act in a way with integrity."

Mr. Goldstein shared two stories from his career to illustrate to students how the ethos of the Honor Code applies to life beyond Pingry.

First, as a writer for TIME, he traveled to Littleton, CO in the aftermath of the Columbine High School shootings to speak with residents about how life had changed and about the community's fraught path to healing. At that point, few Columbine residents had spoken with the media, and the editors hoped that Mr. Goldstein's experience as a teacher might help them feel more comfortable opening up to him.

However, because of the May 3, 1999 cover, which seemingly glorified the killers in full color, while much smaller, black-and-white images of their victims surrounded them, community members were upset with TIME and wanted Mr. Goldstein's assurance that a similar cover wouldn't run again. Weighing his duty to his employer to extract the story and his motivation to advance his career against his desire to do right by the people of Columbine, he knew he couldn't make any promises. However, he sought a balance between reassurance and reality, telling his interviewees, "I don't decide what goes on the cover, but I can't imagine the editors would do the same thing again."

But then, video footage of the young killers prowling around Columbine's cafeteria surfaced. Against Mr. Goldstein's urging, the editors decided to put them on the cover, again. Knowing the people he interviewed would feel betrayed, he contacted each one in advance of the press date to make them aware. "I don't know if we could have pushed harder to keep that photo off the cover. I had selfish reasons for not wanting to fight with the editors," he told Pingry students. "I worried about what motivated me during that time." The lesson he learned, he added, is one he continues to live by: "I hope you all strive to get your motivations right. It can be hard to set aside what is selfish from the principles you want to base your decisions on, but you need to try."

The second story that Mr. Goldstein shared, during his time at the Public Corruption Unit in the Southern District, relates to what he considers his highest-profile case prior to working with Mr. Mueller: the prosecution of former New York State Assembly Speaker Sheldon Silver, for corruption and bribery. During the course of their investigation, Mr. Goldstein and his staff discovered that the Speaker had extramarital affairs with two women with business connections to the state.

"Prosecutors have enormous power over people's lives, deciding when to charge someone with a crime and what information to make public," Mr. Goldstein said, referring to his team's conundrum of whether or not to divulge knowledge of the affairs publicly, which, while not critical evidence, would no doubt strengthen their character case against him. "We viewed [the Speaker's] actions as part of a larger course of misconduct, but when you work for the government as a lawyer, you have to think about the greater good for the public interest, not about winning at all costs. You have to make decisions for the right reasons."

So, Mr. Goldstein's staff made an "in-between" decision, providing the information to the court under seal—only the judge, Mr. Silver, and his attorney were aware of it. After a conviction was delivered—and a fair trial had been achieved—the judge decided to make the information public for use in Mr. Silver's sentencing. Of his team's decision—and similar decisions he has made throughout his career as an attorney—he told students, "I am just as proud of decisions to walk away—that's often a lot harder than prosecuting and bringing to justice a particular person."

Advising students on their own career paths, Mr. Goldstein encouraged them to read the words on the Honor Code plaque, which hangs in the front entrance of the Basking Ridge Campus. "Step back and look at our public discourse today—the values taught at Pingry are not top of mind. You don't hear a lot about personal integrity. You hear about winning, doing whatever it takes to defeat an opponent. The importance of telling the truth has dropped off the list of what people think matters. As Pingry students, that should not be acceptable to you. You should try to do something about it . . . remember the values you were taught here. Try to find work where at least part of your job is to serve the public's interest, not just your own. And if you find yourself in a position where you're pressured to take shortcuts or win at all costs, you should get the hell out of there." 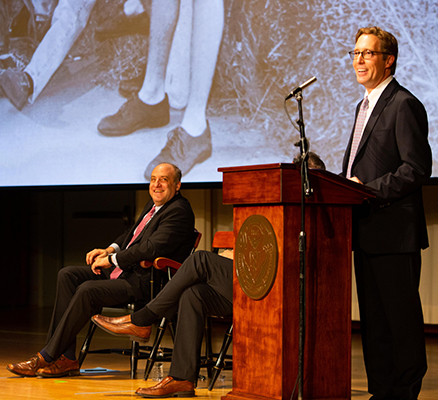 *Mr. Goldstein, a student and teacher during Mr. Hanly's Headmastership (1987-2000), most recently returned to Pingry this past May for induction into Pingry's Athletics Hall of Fame as a member of the 1991-92 Boys' Basketball Team. Providing a comedic start to a serious discussion, Pingry's Director of College Counseling, Tim Lear '92, P '25, '27, '30—Mr. Goldstein's friend and classmate since 1986 (they met in Middle School)—entertained the audience with amusing anecdotes and photos from their Pingry days, and even a quiz for students! We invite you to watch the full lecture, including this creative introduction!

Established in 1999 by a group of donors on the occasion of former Headmaster John Hanly's retirement, the John Hanly Lecture Series on Ethics and Morality celebrates Mr. Hanly's commitment to teaching students and other members of the school community how to make tough decisions within an ethical framework. This endowed fund enables Pingry to bring a variety of speakers to campus to address the moral and ethical issues facing all of us in the 21st century.