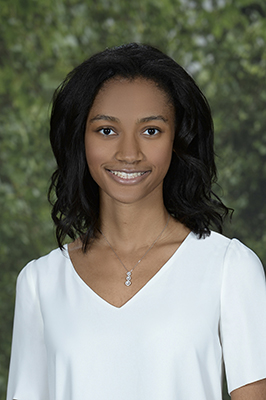 It took a year, but 2020 Stifel Award recipient Chloe Mason '21 received her proper recognition from the Pingry community this month.

"Chloe is a bright light, a force of kindness and compassion, a doer of right, a human who cares more about others than herself, and a young woman who speaks out and up, using her voice for good. Chloe is all things positive, even when things are negative," said Director of Institutional Advancement Allison Brunhouse '00, Chloe's advisor for the past four years, before presenting her with the award.

The Henry G. Stifel III Award is named for Mr. Stifel, who was paralyzed in an automobile accident during his junior year at Pingry. The Stifel Family established the award at Pingry in 1984 to "be awarded to the person who best exemplifies those characteristics exhibited by Henry G. Stifel III '83 in the aftermath of his accident and spinal injury: courage, endurance, optimism, compassion, and spirit." A Pingry lifer, Mr. Stifel is a former trustee who has received Pingry's Cyril and Beatrice Baldwin Pingry Family Citizen of the Year Award and Letter-in-Life Award, is a Vice Chair of the Christopher & Dana Reeve Foundation's Board of Directors, and works at Morgan Stanley.

The "negative" to which Mrs. Brunhouse referred, and the reason for this recognition, are Chloe's numerous medical issues: an epilepsy seizure disorder—specifically, absence seizures, which are sudden, brief lapses in attention—post-concussion syndrome, migraines, dizziness, and nearly constant headaches.

But she never complains. "It feels as if this award was written for Miss Mason, too, because those five words are so her—courage, endurance, optimism, compassion, spirit," Mrs. Brunhouse said. "Chloe is courageous, strong, and patient, infinitely positive, the best friend to all, and the spirit you want to surround yourself with, always."

In her remarks, Chloe observed that constantly being in doctors' offices because of chronic illnesses can contribute to emphasis in the wrong place. "Doctors don't tell you what you're great at, what makes you special. They highlight all the parts they see as broken. So, you dwell on the bad stuff, you develop a sense of tunnel vision. I stopped appreciating the things I did really well and focused more on why my brain didn't 'work' the way I wanted it to."

Digging deeper to find the "good," Chloe said, is more difficult, but she has finally arrived at a point in her life when she's not ashamed of her experiences. "Now I know just how beautiful it is to be different. So, my advice to you all would be to not let people's opinions of you diminish what you think you are capable of . . . and in this moment, receiving this recognition, I feel the exact opposite from broken, I feel whole."

Joining the assembly virtually from Louisville, KY, where he is a research participant in a study at the University of Louisville, Mr. Stifel offered his commendations to Chloe. "This community has learned from your courage and spirit, and their support has helped you to persevere. We know everyone's challenges are unique, but I feel their vulnerabilities also bring out the vulnerability of the collective community, especially as they strive to build a relationship together. As a result, the individual and the community-at-large learn true courage and perseverance and grow together."

Mr. Stifel also praised the Pingry community for, in its own way, living up to the spirit of the award. "We have never faced a pandemic like this in our lifetime, and no one knew how it would all unfold and the loss we all would experience. There has been no greater time than this past year where the sense of community has ever been more needed, but you, as a school, persevered and were even recognized nationally and locally. Together, you emulated the characteristics of this recognition—courage, endurance, optimism, compassion, and spirit."