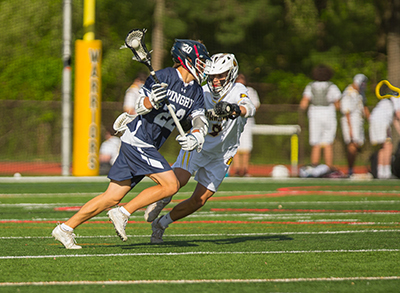 The Boys' and Girls' Varsity Lacrosse Teams are making up for lost time this spring—both are charting successful seasons and well positioned as they head into their respective state sectional tournaments next week.

Ranked #7 in the state by NJ.com, the boys' team, 10-1, has suffered all but one loss this season, when Westfield edged them, 11-10, in the annual Bristol Bowl on May 5. And thanks to their sound, 19-1 defeat of Ridge in their final game of the regular season on Saturday,  they claimed the Skyland Conference title for the first time in the school's history. What's more, they enter their first state sectional game—the NJSIAA Non-Public B quarterfinals next Wednesday—ranked #1, and are hungry for another state title (they last won in 2018).

"We have been focused on getting better each day in pursuit of state championship #7 in our school's history," said Head Coach Mike Webster. "Our six seniors have been great leaders." Worth noting, four of those six seniors plan to continue their lacrosse careers in college next year—Avery Kirby (Bowdoin), Cal McPherson (Holy Cross), Kevin Parnham (Penn State), and Tommy Robertozzi (Gettysburg). 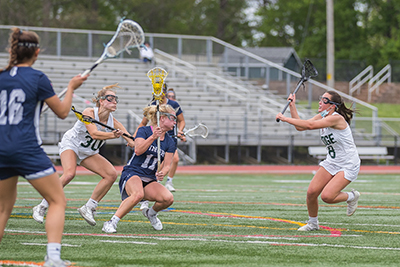 Ranked #12 by NJ.com, the girls' team is currently 9-5. In their final game of the regular season on Thursday, they fell to Moorestown, 21-7, but had big wins over Haddonfield (13-10), Hunterdon Central (14-9), and Ridge (14-7 earlier in the season. In the NJSIAA Non-Public A Tournament they're ranked #5, and are set to face Paul VI next Wednesday in the first round. After a "red hot" season in 2019, according to NJ.com, where they clinched their second straight sectional victory, they are looking to advance in the tournament, though top-ranked Oak Knoll will be a formidable opponent.

"Because of COVID we had no idea what to expect this year from the team and the girls," said Head Coach and Director of Athletics and Community Wellness Carter Abbott. "We approached the season wanting to have fun and be together. We have gotten so much more than that....and we aren't done yet!"