The Pingry School
A Record 7 Ski Racers Advance to the Race of Champions
adawson
Feb 19 2021 7:58 AM 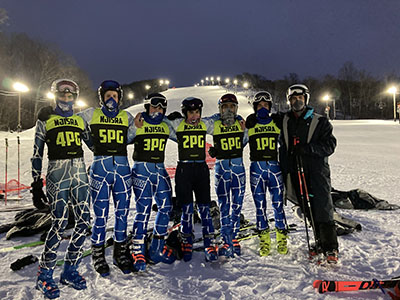 The winter sports season, like the fall, has been a challenging one for nearly all high school sports. But Big Blue's Ski Racing Team has capitalized on its intrinsic conditions—outdoor, socially distant competition—not to mention one of the snowiest winters in recent memory, to produce one of its most successful seasons.

Missing gold by just two seconds, the Girls' Varsity Team was led by Camille Collins '23 in second, co-captain Rosemary Collins '21 in third, and Annabelle Collins '23 in tenth, as well as co-captain Emmy Baird '21, Olivia Hauck '22, and Carolyn Coyne '21. (Kat Andersen '21 was injured and unable to compete.)

Three days later, at the Slalom State Championships, Dylan clinched first and Camille placed fourth overall. When the two days of state competition wrapped up, while the teams were unable to hold onto a podium finish, the girls took home the Non-Public State Championship title for the second year in a row.

The teams also advanced a record seven skiers to the Race of Champions (ROCs) on Wednesday, February 17: Rosemary, Annabelle, Camille, Olivia, Dylan, Tobey, and Matt. ROCs determines the State Championship podium and, together with standings from the regular season, the All-State Team, which represents New Jersey at Eastern Championships, typically held in northern New Hampshire over four days in March. (Due to COVID-19, Easterns will not be held this year). 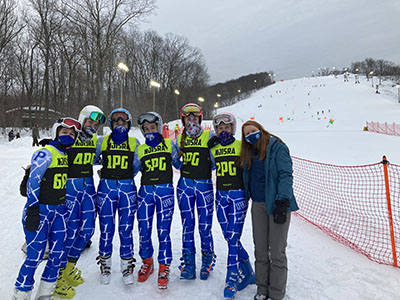 Two of the teams' captains share their thoughts on the season:

"The team performed well at States and ROCs this year. We had a few setbacks but these will only help motivate us to do better next year. We are losing our seniors, but are lucky to retain a strong roster and we are looking forward to welcoming new members."—Tobey Jay '22

"I am extremely proud of our team's attitude and performance this year in the face of various obstacles. We have grown and strengthened astronomically over my past four years, and what we were able to accomplish this season is genuinely beyond anything I could have imagined as a freshman. Taking the non-public title was a great end to a great year with 4/6 regular season wins, and I know the team has a fire within looking for the big trophy next year. I'm sad to leave behind the team I've led for the past three years, but am content knowing I'll most definitely be hearing of continued success in the years to come."—Rosemary Collins '21