The Pingry School
6 Pingry Alumni Share Why They Chose to Attend an HBCU
adawson
Feb 25 2021 4:45 PM

Last Wednesday evening, more than 60 members of the Pingry community, from all three divisions, gathered on Zoom for the school's first-ever alumni panel featuring students and graduates of Historically Black Colleges and Universities (HBCUs). It was one in a series of events celebrating Black History Month, whose theme, "We Are Pingry, Too: Black Strength, Beauty, and Success Through Time," sought to educate and unify the school community. And the panel was a unique opportunity for Pingry students and their families as well as faculty and staff to connect and network with current HBCU students and graduates.

Among many topics covered, the following six alumni shared how they decided on an HBCU (more than 100 exist nation-wide), what surprised them when they got there, and what advice they have for current Pingry students considering them; they also demystified common stereotypes. Below, highlights from the illuminating conversation.

*The following excerpt has been edited and condensed for clarity. 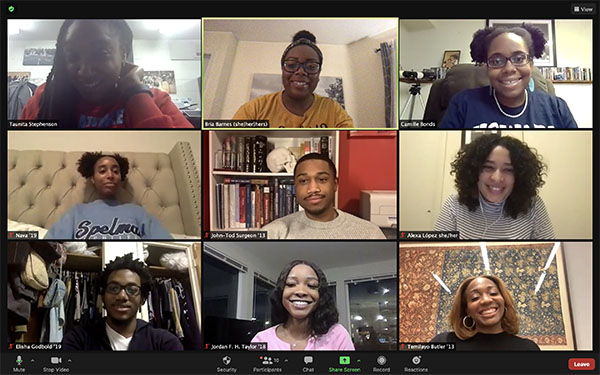 Can you talk a bit about your journey to your HBCU?

Temilayo: I started Pingry in Grade 3. It doesn't feel good to always be a minority. I was searching for an opportunity to be among a majority. I applied to Spelman, too, but both my parents and grandparents went to Howard, so I was able to visit during Homecoming. At Howard, I got more of a competitive advantage as a Black person. I had never seen so many Black people doing so many amazing things.

John-Tod: Once you step foot on an HBCU campus you're transported to a magical place where everyone looks like you, everyone is trying to do something that's worthwhile, and you feel like you can do it, too. All of that made me have to go.

Elisha: I definitely wasn't sure what career path I wanted to pursue, and I'm still not sure, so I wanted a school that could nurture an environment where I could learn more about different career paths. For me, it wasn't about where. You never know what school might be a fit for you. If you're considering applying to an HBCU, definitely apply. It doesn't hurt to apply to more schools, speaking as one who applied to a lot of schools. My only regret is COVID taking me away from campus. Other than that, I have no regrets.


How did Pingry prepare you?

Nava: Pingry definitely prepared me academically. Pingry is going to teach you how to study, how to learn, how to seek out resources so you can succeed. I carried those lessons with me to Spelman. My sister and I both attend, and she felt like [attending a school in the South] was a culture shock. I didn't experience that. Spelman is very small, and Pingry is small, too, so the class sizes are similar. I also like the AUC [Atlanta University Center] experience, where Morehouse, Clark, and Spelman all share a library, which we call "Club Woody."

Temilayo: Pingry will prepare you for any school. But having primarily Black teachers, you don't realize how transformative that will be. You can only get that at an HBCU. [Given my major], I had an advantage over Black students who went to PWIs [predominately white institutions] because I knew how to be Black in business. I knew how to shop myself around and share my skill set because of my race, not in spite of it.


What have some of your most rewarding experiences been at your HBCU?

John-Todd: In science, it's important to practice the material through volunteer or other work in a lab. That's easy to do at Howard. I was also able to work in a cancer research lab at the NIH [National Institutes of Health]. Howard kickstarted any hope I had of becoming a researcher and researcher/physician.

Temilayo: All these premier institutions are recruiting at HBCUs. If they want talented young Black people, they're going to go to HBCUs. The sheer depth and breadth of companies who come [to Howard] is impressive. We have the 21st Century Advantage program [for business education] and I was matched up with different institutions throughout my time at Howard. I interned at Morgan Stanley, Goldman Sachs, and Bloomberg. I was also really into my language and was a Fulbright semifinalist. I have so many avenues I can pursue with Howard behind me.

Annaya: My classes have already begun to shape me as a person and shape the work I want to do in the future. I was recently nominated to be a UNCF Education Fellow, and I did research last summer at Columbia University on queer love. I wouldn't have gotten these experiences at a PWI because there's not a push like there is at Spelman. And I don't have to compete just to be seen as a Black woman in a sea of white or male people. There's also a deep and kind alumni network. They came together to give students devices for remote earning during the pandemic.

Nava: I'm a STEM major. That's a predominantly male, white field. But I'm interning with Microsoft this summer. Last summer I interviewed with NBC Universal. HBCUs teach you you're worthy of being in these spaces; these companies want you because you're valuable. Black professionals will come to Spelman to speak with you one-on-one. You get to sit down with someone from Goldman Sachs. Where else is that going to happen for a Black person?

Temilayo: Homecoming at Howard was also a cathartic experience—the lineage and history and sisterhood of so many powerful women behind me. Academics are super important, but the social component of an HBCU is just as valuable. It can be life-changing when you realize you feel comfortable for the first time ever. You cannot be your best if you're constantly feeling like you can't be your true authentic self. I couldn't feel that until I was at a place like Howard. I came out of shell at Howard. That's an experience you can't replicate.