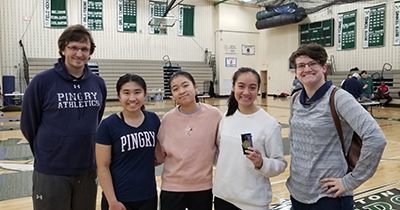 It was a big day for Big Blue (9-5) at the NJSIAA Individual State Fencing Tournament, held at Livingston High School last Sunday. After a nail-biting, tie-breaker match, Jessica Lin '21 defended her state epée title, taking gold once again. Her sister and teammate, Katie Lin '23, tied for third. Alison Lee '20 and Zala Bahn '23 placed fifth and ninth, respectively, in foil. Putting four individual fencers in the top-10 ranks as one of the team's best seasons in program history. And it was the culmination of a tremendous season.

In January, the team placed second overall at the District 5 Fencing Tournament, with the epée and foil squads taking gold— Jessica and Katie took first and second, respectively, in epée, while in foil, Zala was first and Alison placed third.