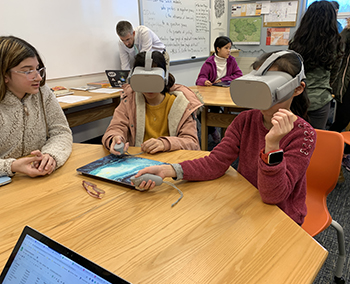 It was not your typical Spanish class. In mid-January, Middle School students in Spanish 1A could be seen in their classroom, with Oculus Go virtual reality (VR) headsets firmly affixed to their eyes. They were eagerly exploring worlds of their own making—in Spanish, of course.

Thanks to a collaboration between Middle School Academic Dean and Spanish Teacher Allen Thomas and Dr. Danielle Mirliss, Education Technology and Innovation Coordinator on the Basking Ridge Campus, the students' assignment was to design a house, label all its interior items in Spanish, and write a short script among four family members, who would enact the dialogue inside the house. Using CoSpaces software (pictured bottom right), which includes a built-in coding function, students constructed their houses in 3D and immersed themselves in the interiors through VR. At play were a number of key skills, including algorithmic thinking, 3D design, perspective, block coding, and, yes, Spanish!

It was the first time Mr. Thomas experimented with virtual reality in his class, and he deemed it a success, both from his standpoint as a teacher—it was a creative, effective way to communicate the material—as well as for the students. "They found it extremely engaging to design an environment in Spanish in which they could interact with and create characters who were actually speaking the language, using the vocabulary they were studying in class," he says. "In addition to the technology component, students were able to integrate multiple disciplines at the same time." 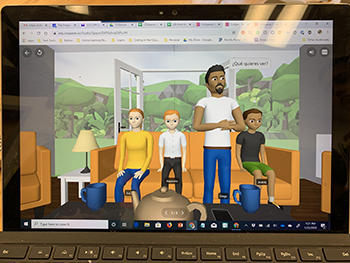 For Dr. Mirliss, who also teaches a class for Form I students on game design, this sort of immersive, VR-based experience is an easy hook for Middle Schoolers, introducing them to the basics of computer programming. When they get to the Upper School, where students are creating art in virtual reality using the app Tilt Brush, or taking a VR tour through a heart or lungs in their anatomy class, they will already have a foundation of knowledge.

"Middle Schoolers are super excited to do this stuff, it's just a matter of scaffolding for them," she says. "The more they're getting these experiences now, the more they're building skills to be able to apply computer science to various disciplines in the future, using CAD, 3D modeling, and interactive media software."

To be sure, the introduction of VR in Mr. Thomas's Spanish class is just one example of the many ways in which technology is integrated into the Middle School curriculum. Among many examples, students in Emily Glatter's history class are experimenting with podcasting; Spanish teacher Karim Del Pozo uses green screen technology to help her students create short stories; and a 3D printer is allowing science students to design their own organisms.

In addition, all Grade 6 and Form I students are required to take a computer science class; in From II, it's an elective. Form I students are also introduced to Game Design using the platform Unity. What's more, an array of related clubs meet weekly—STEAM, Robotics, Virtual Reality, and Minecraft. The multitude of possibilities allows Middle Schoolers to be curious learners, and readies them for even more technological fun in the Upper School.

View the VR projects from Mr. Thomas's class on CoSpaces.