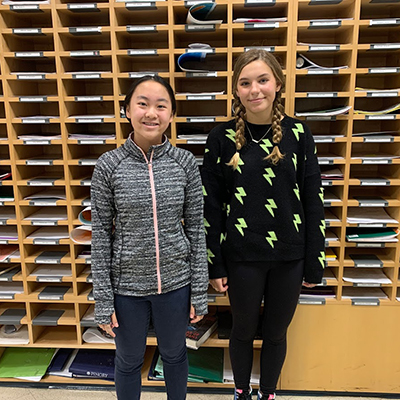 Keira was inspired to write, in part, by Pingry's after-school Creative Writing Enrichment class, which she took for the first time last spring. Led by Upper and Middle School English Teacher Audrey Enriquez, she said the class got her more comfortable writing shorter pieces, which she had struggled with before. "Ms. Enriquez was really helpful with tips and insight to convey what I wanted to tell the readers," she says. "My favorite part of the class was probably when we wrote micro-stories. They were challenging, being 100 words or less, but it was really fun. In fact, one of my micro-stories ended up being a base for a separate contest entry I submitted."

Keira's mother told her about the contest; submitting a science fiction story was an easy choice for her. She has always loved the genre—"it transports me to realms of imagination, creativity, and freedom," she says. She describes her piece as "a tale of a jaded teen learning to see the possibilities of the future. . . My message was that individuals hold power in themselves to support a cause they believe in, even for something as large-scale as reversing climate change."

For her part, upon return from the Form II trip to Washington, D.C. last fall, Grace wrote a reflection piece about her experience at the Holocaust Memorial Museum. Her English teacher of three years, Lynne Cattafi, encouraged her to submit it to the contest. "My visit—especially the films of the concentration camps and the piles of victims' shoes— opened my eyes to the sickening treatment of people who, other than their Jewish faith, were just like me," she explains.

She credits Pingry with nurturing her writing. "At the beginning of Middle School, I didn't want anything to do with writing, especially creative writing," she says. "As I wrote more and more, through classes and clubs at Pingry, I warmed up to it, and actually started to enjoy it. Now, creative writing is one of my favorite things to do."

Below are excerpts from their awarded essays:


Keira Chen '24, "Dreams of Change"
The legends say that the island of Ostrov used to be a rich, lush place full of magic and wonder. It was a place where dreams could come true.

I don't know if I believe those legends. They're probably just the product of someone's wishful thinking, anyways. Nowadays, Ostrov is a bustling city, the namesake of the island, the epitome of modern times. There's not much of the Old Land left. Only bits and pieces, if you know where to find them.

Sitting in the park's bushes in the shadow behind two buildings, I search for glimmers of magic in nature—what most call "Shatters"—though I don't have much hope of finding one. The last time I found one here was at least several weeks ago.

Maybe I should move on.

Sighing again, I stand up, swiping at my clothes to get the green off.

It's quite sad, really. This place is one of the few natural areas left in this city. One of the last on this island, maybe.

But what can I do?

I shake my head. I'm being silly. This place is too far gone anyways.

Grace Fernicola '24, "Footsteps and Shoes"
I closed my eyes to avoid the scene on the screen, and suddenly the footsteps of people walking through the exhibition room became the footsteps of the man dragging the woman's body down the road. It was as if I was standing there, shivering in the cold and watching, unable to do anything to stop him. I snapped out of it, but when I turned around I saw a starving young girl on a hospital bed on another screen. Why didn't these filmmakers intervene instead of simply standing aside to film these heartbreaking moments? And for what purpose? I can only hope that the films were made so we all never forget the unspeakable things that humans can do to other humans.