Highlights from last season:
Led by captains Jack Timko '19 and Luke Ackerman '19, the 2019 team (9-8) advanced to the semifinals of the NJSIAA Non-Public B State Tournament, but fell short of a fifth straight championship title. They also advanced to the semifinals of the county tournament and had some decisive wins over tough local rivals Bridgewater-Raritan and Watchung Hills. 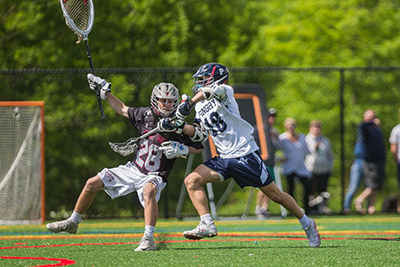 What to watch for this season:
• Big Blue graduated seven seniors last spring, but what the team lacks in experience they will make up for in potential, with a roster of 45 varsity and JV players, including several sophomores looking to make major contributions this season.

•  Captains Matt Korth, Ben Peacock, and Kalman Kraham, who has committed to play for Lafayette College next year, will be leading the team into its 65th season, the longest running varsity lacrosse program in New Jersey.

• According to Coach Webster, the team's goal is to improve each day in pursuit of the program's seventh state championship (they last won in 2018). To this end, he plans to have several players switch positions so the team is supported as effectively as possible.

• Big Blue's preseason training trip to Florida will be important for setting team culture, identifying top players, and preparing the team for the challenges of the regular season in the highly competitive Skyland Conference.

• Their first game is scheduled for March 25 against Phillipsburg.


Full-court press:
"Our team motto this year is 'Full Speed,' based upon our desire to play fast and our emphasis on great hustle in all things we do. It will be an exciting season."—Head Coach Mike Webster