On a cold, blustery 5k cross-country course at Holmdel Park last Saturday, Nicole Vanasse '20—who has dominated Pingry's cross country and track and field programs since her freshman year, breaking school records nearly every season—highlighted her senior season with yet another achievement. In just under 19 minutes, she won the NJSIAA Non-Public A Championship race for the third year in a row, becoming one of only 12 female runners to "three-peat" in any of the six state championships in the last 47 years. And she did it not feeling 100%. 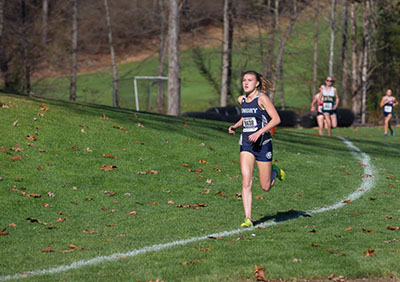 "I'm really grateful for this [win]," she told MileSplit New Jersey reporter Robert Kellert in a video interview after the race. "I wasn't feeling well earlier this week, I was sick, and my training suffered quite a bit. So, on the starting line I was a little iffy. I ran more conservatively, but I think it went pretty well and I'm really excited."

Nicole's win—which comes just three weeks after she won the Somerset County Championship—advances her to the Meet of Champions (MOCs) on Saturday, also at Holmdel Park, where she hopes to be back in full form and improve upon her 18:23 PR there at the same meet her sophomore year.

"I just want to go out and compete," she told Mr. Kellert. "After another strong week of training, my confidence will go up. I just want to see what I can do and really just go out and give it all I've got."

Following MOCs, Nicole will compete at the Foot Locker Northeast Regional Championships, held in Van Cortlandt Park on November 30. A top-10 finish will advance her to the Foot Locker National Championships in San Diego, on December 7. Last year, Nicole became the first Pingry female runner ever to qualify for the prestigious national event, and during this, her senior season, she hopes to do the same.

Congratulations, Nicole and Henry, and best of luck at Meet of Champions!