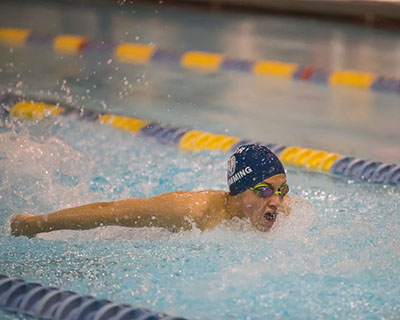 Highlights from last season:
The boys' swim team did not see a single loss last year under Head Coach Steve Droste P '25, capturing titles in the conference, county, Prep A, and NJSIAA Non-Public B tournaments. Their 12th straight state championship tied the all-time New Jersey record for most consecutive state titles. At the Meet of Champions, Pingry took first in all three relays, two of which were finished in all-American times. Matt Fallon '21 won the 200 IM race (1:48) and the 100 breaststroke race (54.38), finishing both in all-American times. His 100 breaststroke time was the fastest ever recorded by a high school swimmer in New Jersey. Leighton Mayers '19, who is now swimming for Bowdoin College, won the 100 backstroke (50:28) in his last swim for Big Blue before graduating.

Full-court press:
"We are looking to continue a tradition of success and sportsmanship. I hope that every swimmer can continue to improve, that they become a unified team, and most importantly, they have fun." ––Head Coach Steve Droste P '25