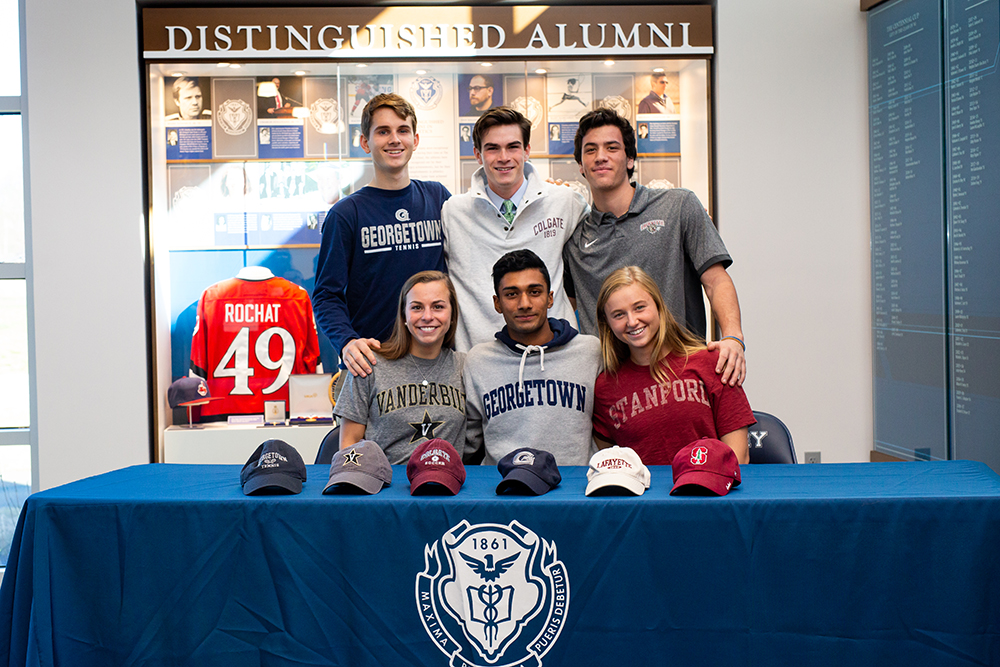 Kicking off the National Letter of Intent (NLI) signing season, four Pingry boys and two girls recently marked their formal commitment to pursue their education and athletic careers at five different Division I schools. Approximately 20 more college-bound athletes from the senior class expect to compete for Ivy League and Division III teams and are awaiting their December early decisions.

We look forward to updating the Pingry community in the spring with the full list of college-bound athletes. In the meantime, if you're curious, read last year's article, in which 23 student-athletes headed to college teams.

Pingry's 2019 NLI signers are as follows:

Kalman Kraham—Lafayette College—Lacrosse
A three-year varsity starter for Big Blue, Kalman, an attackman, broke Pingry's single-season goal record as a sophomore, netting 49. That same year, he earned NJ.com Player of the Year honors. He is a two-time all-state and all-conference honoree, and, during his tenure with the Boys' Varsity Lacrosse Team, has helped them to two NJSIAA Non-Public B State Championship titles.

"In the history of Pingry's lacrosse program, Kalman is currently in third place in career goals and ninth place in career points. He has a chance to significantly move up the list with another great season this spring. He has been a consistent scorer since his freshman year and brings energy and skill to every game he has played. He will do great things in college."—Head Coach and Middle School history teacher Mike Webster P '24, '27, '27

Will Bugliari—Colgate—Soccer
A four-time letter winner and captain of the Boys' Varsity Soccer team, Will has helped lead the team to four straight appearances in the Somerset County Tournament finals, receiving all-state and all-county awards as a junior. As a senior, he helped the Big Blue to win a Skyland Conference title and advance to the NJSIAA Non-Public A North Jersey finals. Will also lettered in ice hockey and track and field at Pingry, and is a member of both the boys' lacrosse and golf teams. At Colgate, he will play midfield.

"Will's speed, determination, and technical abilities on the soccer ball make him an exciting prospect for Colgate's soccer program. Having scored 18 goals and provided 25 assists over his career at Pingry, big things are expected of him from the Red Raiders."—Associate Head Coach and Associate Director of Operations, Safety, and Strategic Initiatives David Fahey '99

"Emma came to lacrosse late in the game, after making varsity her freshman year, and hasn't looked back since. She is a phenomenal athlete who has taken to the game very quickly, dominating opposing attackers with suffocating pressure. Her competitiveness and drive take her to the next level, and make her a very special player. I look forward to watching her in the years to come."—Head Coach and Director of Athletics Carter Abbott

Derek Raskopf—Georgetown—Tennis
A two-year letter winner at Pingry, Derek advanced to the round of 32 in the state singles tournament his freshman year, and earned Second Team All-State honors his sophomore year. Ranked #8 in the USTA eastern section for boys under-18, he is an eight-time Eastern Empire Cup doubles champion, a semifinalist in singles and doubles at the International Junior Championships G5 in Nassau, Bahamas, and a 2017 national doubles champion in the National L3 Tournament in Amelia Island, Florida. He is currently ranked #70 nationally for the class of 2020 on tennisrecruiting.net.

"A strong competitor at USTA Tennis Tournaments and a 4-star recruit, Derek will be playing for Georgetown University next year. Derek had a successful freshman and sophomore year playing number 1 for Pingry."—Head Coach Marion Weber

Pranav Jha—Georgetown—Soccer
A four-year varsity letter winner and senior captain of the Boys' Varsity Soccer Team, Pranav led the team in goals his junior year and earned all-state, all-conference, and all-county honors. In 2019, he was named a High School All-American and a member of the All-USA Preseason High School Soccer Team.

"Pranav's versatility will be an asset to him at Georgetown. The Hoya's have become a national powerhouse in recent years, and his ability to play multiple positions and his thirst for self-improvement will guarantee his success."—Associate Head Coach David Fahey '99

Caroline Dannenbaum—Vanderbilt—Track & Field
Caroline, who will take her pole vaulting talents to Vanderbilt next year, made her mark on the Girls' Varsity Track & Field team her freshman year, when she cleared 11'6" indoors to set a New Jersey record for freshmen. In 2018, she was ranked #1 in the country among sophomore vaulters, and, by her junior year, she won the indoor NJSIAA Meet of Champions and took second at same event outdoors. Also in 2019, capping her successful indoor season, she placed eighth at New Balance Nationals, clearing 12'10.25 to set a new personal and school record.

"Caroline is a great athlete, teammate, and leader, but the one characteristic that really sets her apart is that she is an outstanding competitor. When she has to do something to win, she makes a game plan, focuses on execution, and attacks her task with everything that she has. During her sophomore year, Caroline pole vaulted 13 feet, putting her first in the entire country among high school sophomores. Not only is this still the current Pingry girls' pole vault school record, but there is only one boy in the school's history to ever jump higher. Caroline even has a very good chance this spring season to overtake that mark, too, which is only six inches higher. Her accomplishments are too numerous to list, but a notable standout is having won the Meet of Champions. Her positive energy is infectious and inspiring to those around her. Vanderbilt is very lucky that she will soon be a part of their team and their community."—Head pole vaulting coach, Mark Cortazzo P '15, '16