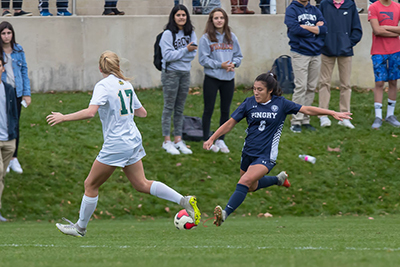 Following a historic 2018 season, during which Pingry girls gritted their way to a state group crown, Thursday was an opportunity for them to show their staying power. And they did. Facing second-seeded Red Bank Catholic once again in the NJSIAA Non-Public A South Jersey finals, top-seeded Big Blue (16-5) scored within the first 10 minutes to set the pace, ultimately defeating the Caseys, 3-1, to claim their second consecutive sectional title.

It was a feel-good victory, after advancing to the Somerset County Tournament semifinals for the second straight year earlier in the season, but suffering a close, 2-1, loss to Ridge. In an NJ.com article, a prideful Head Coach Lauren Molinaro credits the fact that the team is "blessed with top-class at all posts." "Our defense is so hard, gritty, and tough. And our midfield is so smart. . . we can battle with the best teams in the state," she was quoted as saying.

Another major contributor was senior Madisyn Pilla, who marked her 45th and 46th goals in the game, adding to her single-season school record (Brittani Bartok '08, who went on to play for the University of North Carolina, previously held the record at 38). Leah Mangold had the final goal for Pingry. 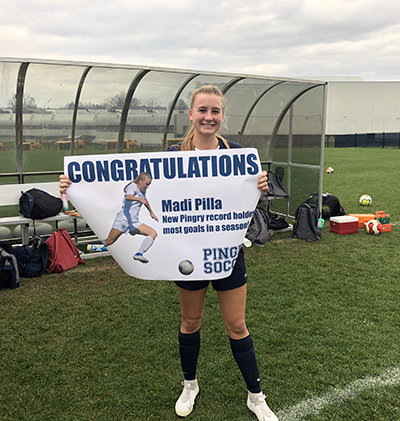 Of the team's title-defending performance, Coach Molinaro said, "RBC is a very tough opponent. Today's game was about not only who wanted it more, but who was willing to do the work to get it. Fortunately, today, it was us, and I could not be more proud of the girls. They were relentless, they played as a team, they won 50/50 balls, they were dangerous on set pieces, and they just played their hearts out. It was an incredible victory."

Stay tuned, fans, as Big Blue faces DePaul Catholic High School in the Non-Public A finals on Sunday, and a chance to defend their status at state group champions.

"It will be another tough match-up, but what an amazing opportunity we have—getting to play for back-to-back state titles," adds Coach Molinaro. "As long as we remain focused on the things we can control, play our style of soccer together, as a unit, and have fun, I am confident in us, and hopefully we will come out of the weekend with another state title."

Photos: Olivia Volpe '20 (top) contributed an assist in the game; Madisyn Pilla '20 celebrated her 46th goal of the season, improving upon her school record.