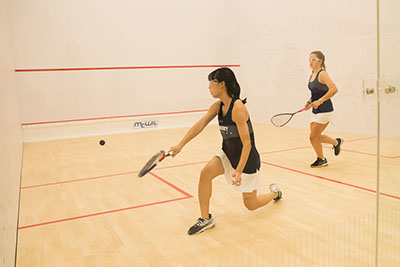 Last season's highlights:
The 2018-19 Girls' Varsity Squash Team had a successful season, finishing with a 5-2 record. Their regular season results were strong enough to earn them a spot in Division 1 at the US Squash National High School Team Championships. The competition was tough, as they competed against the best in the country, and the team finished with a national ranking of #16, one spot better than the boy's team and only the second time in the program's history that the girls' team outranked the boy's team at the end of the season. In the finals of  the New Jersey High School Championships, an individual tournament, Renée Chan '20 defeated teammate Alisa Chokshi '19, who is now playing for Cornell.

Full-court press:
"I'm excited about the season because this is my first time working at Pingry. I want to bring a lot of fun to the season, and see where it goes."—Head Coach Francis Odeh

"I'm really excited to have Coach Odeh joining the program this year. I'm looking forward to working closely with him, and it's great to know that our Girls' Varsity Team is in such capable hands."—Boys' Head Coach Ramsay Vehslage

"This year, I'm really looking forward to having a strong group of girls on the team, both returning and new, and our new coach Mr. Odeh! I've known him for many years, and I think all of the girls will love his high energy and encouraging spirit. Lastly, after a season that didn't necessarily end the way that we wanted it to, due to a couple of injuries, I think all of the girls are coming back this year even more eager and hungry to play hard all throughout the season in preparation for Nationals in early February."—Co-captain Renée Chan '20