The success of the Girls' Varsity Tennis Team (17-2)—which won their third straight Somerset County Tournament crown on September 28 and steadily rose throughout the season to a #4 ranking in the state—culminated in an action-packed week, beginning last Tuesday. That's when Gabrielle Billington '20 clinched the deciding match at third singles to help the team to 3-2 victory over Red Bank Catholic and another "three-peat" as Non-Public A South Sectional Champions. 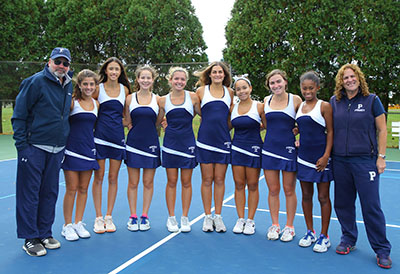 Three days later, in a competitive match-up against Kent Place, the team had a narrow, 3-2 loss, but not without some impressive highlights: The first doubles team of Lily Schiffman '20 and Linda Robinson '20 defeated Kent Place's newly crowned doubles state champions (6-1, 7-5), and the second doubles team of Olivia Gallucci '22 and Sabrina Schneider '22 also pulled out a victory.

On Saturday, the team capped their post-season run as NJISAA Prep A co-champions. In a closely contested tournament, Pingry and Lawrenceville were left to contend for the trophy. Sarah Kloss '22, who won her flight at first singles, and Olivia and Sabrina, who won at second doubles, led the effort, while Caeley Feeney '21 (second singles), Gabrielle (third singles), and Lily and Linda (first doubles) all advanced to the finals against Lawrenceville.

Ranked #1 in the Skyland Conference, Big Blue has enjoyed one of their most successful seasons in recent history. Head Coach Marion Weber, who, along with JV Coach George Roser, have been methodically building the program together, is full of pride. "We've had a great season! The girls have really come together to contribute to the team's success, while having a lot of fun."

Congratulations on a terrific season!

Recall the team's 2018 Non-Public A South Championships victory, as well as their 2018 Somerset County win.