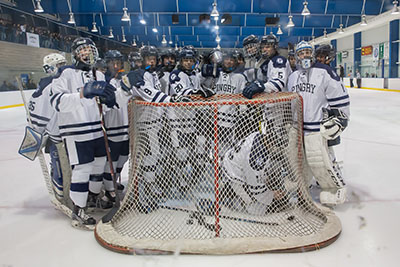 Last season's highlights:
Big Blue recorded one of their most successful seasons last year, with an 19-3-1 record. Matt Keller '19, Nick Spinelli '19, and Daniel Schnack '19 led the team to a Skyland Cup victory, defeating Hillsborough, 6-1, for their first championship win since 2012. Ranked #15 in the state, the dominating team also finished first in the Skyland Conference.


What to watch for this season:
• Captains James Cummings '20, Joe Faccone '20, and Ryan Bush '20 hope to continue what they started last season and defend their title as Skyland Conference and Skyland Cup Champions. In addition to finishing first in their conference, the goal will be to progress further in the state tournament.

• With returning players constituting a large part of the line-up, preparation for the upcoming season will encompass getting back into the familiarity of the team and their goals for the season.


Full-court press:
"As always, we want both the players and coaches to enjoy coming to the rink everyday and to put in the work necessary to improve."—Head Coach Scott Garrow