Ranked #6 in the NJ.com Top 20, the Girls' Varsity Tennis Team (10-1) added to their success this season by outpacing runner-up Gill St. Bernard's on Saturday to take the Somerset County Tournament crown for the second straight year. 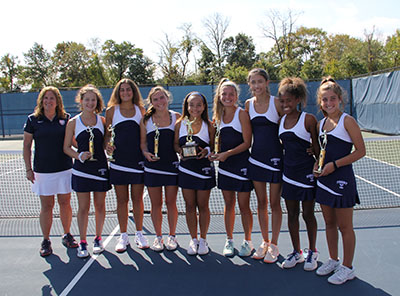 In her ninth year with the team, Head Coach Marion Weber was celebratory, and proud of her athletes. "The team is enjoying a competitive season—great teamwork, team spirit, and preparation are contributing to their success and enjoyment," she said.

Another, equally important factor contributing to the team's success is the thoughtful, methodical approach both she and Head JV Coach George Roser have been taking to build a robust program, one that grooms young players to assume strong varsity positions. Of the six players who advanced to the finals, in either singles or doubles play, three began on the JV roster and two were varsity alternates last year. "Most of these athletes didn't just show up and become starters automatically," remarked Upper School Athletics Director Carter Abbott. "Their success is testament to the program that Marion and George have built, by which the JV kids learn, grow, and advance."

Having won the Non-Public A Championship title for the second consecutive year in 2018, the team—seeded #2 in the tournament, which gets underway next week—is looking to repeat once again this year. And they have their eye on the Group Finals, a win they narrowly missed last season.