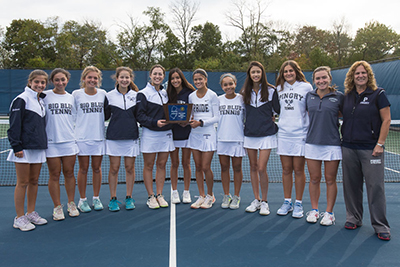 Last season's highlights:
The 2018-19 Girls' Varsity Tennis Team, led by captains Nicole Kloss '19 and Allison Matthias '19, had a successful season, finishing with a 13-4-1 record. The team was victorious, winning the Somerset County Tournament and advancing to the finals of the Prep A Tournament. Additionally, they were the Non-Public A South Champions for the second year in a row, beating Bishop Eustace with a score of 5-0 in the finals. The team also made it to the finals of the Non-Public A Group Championship, with a close, 2-3 loss to Holy Angels. The team worked their way to a #6 ranking in the NJ.com Top 20.

"I'm looking forward to another fun and competitive season, and I'm excited to build upon the success we had last year."—Head Coach Marion Weber

"Caeley and I are extremely excited for the season! We did really well last year finishing 6th in the state but we are definitely shooting for the top three this year. Most importantly though, we just want to have a great time as a team and do our best to represent Pingry on the tennis courts." —Captain Gabrielle Billington '20

"We are really excited for the upcoming season. Despite losing two key seniors who we will miss, we have several returning starters and some new talented players joining the team.  Last year we won counties and the state sectional title for the second straight year. We have set high goals for this season and we can't wait to get the season started!" —Captain Caeley Feeney '21