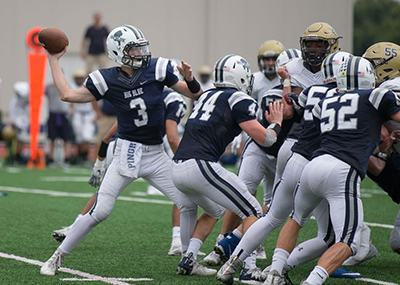 Highlights from last season: Big Blue Football was led last season by a talented group of seniors who were true football players. Three of these seniors, Joe Shilts '19, Jack Baulig '19, and Peter Nicoletti '19, all decided to continue playing football in college. In addition to these three seniors, running back Nate Hefner '19 also showed his passion for the sport. In a game against Pennington, Hefner set the single game yards record, putting up a whopping 275 yards on top of two touchdowns. Although they were not able to achieve a winning record last fall, Pingry defeated Fieldston in a consolation matchup to claim third place in the Metropolitan Independent Football League, despite a number of injuries sustained by important players.

Full-court press:
"Football is hard and physical and sometimes not very fun... This team sticks it out with no reward promised. And this team expects to win." ––Head Coach Chris Shilts