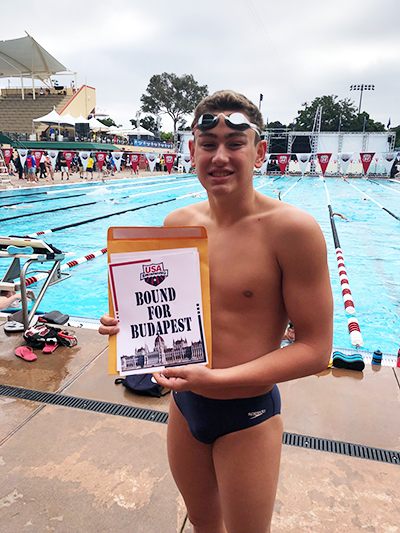 Big Blue Swimming is a powerhouse program stacked with talent, and has been for well over a decade. Adding to its list of accomplishments, rising junior and All-American Matt Fallon, who won two state titles at the Meet of Champions last March, is the first current Pingry swimmer ever to earn selection to a U.S.A. roster for the prestigious World Junior Championships. (Professional swimmer Nic Fink '11, many of whose Pingry records Matt is on his way to breaking, earned selection to the "senior" World Championships after he left Pingry, while at the University of Georgia.)

At the U.S. National Championships last week, where the best of the best vie to represent the U.S. at Worlds—held in Budapest later this month—Matt swam a 2:14.40 in the 200-meter breaststroke, becoming one of just 26 boys, aged 15-18, to grab a spot on the Junior World team.

It's been a busy year for Matt. In addition to helping Big Blue to its 12th straight Non-Public B state title last winter, he also managed to nab a 2020 Olympic Trials cut in the 400 IM and 200 breaststroke at USA Swimming Winter Nationals.