It was the day of departure for us all, but I stayed up all night to wait for my friends who had early flights.

4:00 a.m. Afraid to say goodbye. Clinging to the unforgettable universe I had been exposed to for the past two weeks, working and socializing with individuals, now friends, from all across the country. As we sat outside of the dorms in the dark and silent minutes leading up to their departure, I reflected on the program from different angles. 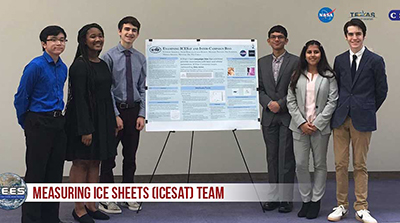 Bird's eye view: 55 students from across the country conducted research alongside NASA scientists via the STEM Enhancement in Earth Science (SEES) summer high school internship program, funded by the Texas Space Grant Consortium and hosted by The University of Texas at Austin. We were exposed to the field of aerospace engineering and geosciences through not only our own focused research but numerous lectures and a behind-the-scenes trip to the NASA Johnson Space Center in Houston.

The individual perspective was more complex. The program gave me an invaluable (and positive) glimpse into engineering and research careers. Nevertheless, I was nowhere near set in my career interests after only two weeks of exposure.

And it wasn't just indecision that caused dismay. Although most of the interns were very humble, there was a subtle environment of competition. LinkedIn pages and national accolades were shared in casual conversation. Interns assessed other interns, groups assessed other groups. Due to this environment and my own nervous perceptions, I started to care a lot more about how I could communicate my own scattered skillsets and achievements, especially to this pool of dauntingly distinguished and hyper-focused interns.

These thoughts turned into words as I spoke with one especially talented and inspiring intern who was leaving in a few moments. I complained about how I felt well-rounded and indecisive and unfocused.

She gave me a rather swift response: "There's nothing wrong with being a circle."

The base meaning was simple and direct. However, due to the sways of my sleep-deprived mind, I extended the logic of the statement. I thought about theoretical circular orbits, unrealistically spherical planets, and a pessimistic school of mathematical philosophy—fictionalism—that my roommate introduced to me.

In that moment, I concluded that yes, there is something wrong with being a circle. It's simply too convenient and untrue to the reality of natural observation. I can't be the greatest writer and speaker and coder and et cetera without rounding off error and compromising results in myself. Without being a phony.

However, as I shuffle through the memories of those two weeks in Austin (and catch up on sleep), I find a stronger counter-analogy. I find myself back at the Johnson Space Center, looking with awe at the insides of the Saturn V rocket. The engines were magnificent, to the point that they looked much more like abstract art than streamlined science. 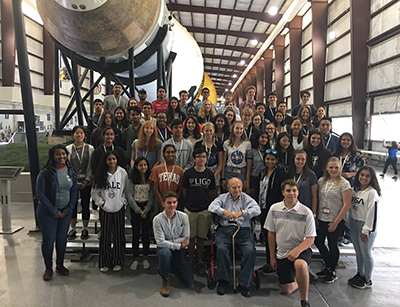 My first impression was that rocket science was so unnatural that it was futile. The sheer amount of fuel and complexity needed to escape Earth's gravity felt strikingly wasteful, especially considering government funding and more pressing prerogatives. But as the presenter (one of the chemical engineers for the rocket during the Apollo missions) shared his enthusiasm for the science behind the task, the problem-solving side of my brain was activated.

The Saturn V was built by different companies and possibly thousands of diverse, highly skilled engineers tuned to one another through effective communication and management. The Apollo mission was an unnatural process with an unnatural result (landing a man on the moon), and that allowed me to see potential and respectability of human constructs rather than dwell on the challenges of the natural world.

In effect, I came to realize that the concept of the "perfect circle" is not inherently flawed––rather, it is the groundwork of engineering, a human tool for outsmarting nature. Even as reality breeds inexorable error, the circle can provide a theoretical groundwork with which to apply knowledge and skills, as well as to facilitate effective teamwork.

My team (our research involved measuring ice sheet changes using satellite data) ultimately learned to harness this sort of philosophy by the end of the program. Our work started off slow, as we stuck by the playbook of previous years and tried to learn an existing software for visualizing the data. But a week soon passed, and we had a dearth of results.

It took late nights and a certain bold data analytic strategy for us to realize that we could make use of our own skills in a much more fruitful way. Consequently, we switched our programming language to Python and designed our own tools for graphings and statistics, dedicating different tasks based on the talents of group members. It was not only more rewarding, but more fun, seeing that we were able to be creative and logical, rather than be limited by the scope and learning curve of a different software.

The project was a promising start, and it has led us to plan to continue to develop our algorithms and research remotely in the future.

What is wrong is thinking of the circle as merely the limit of a single person's skill set. Having both soft and hard skills, both humanities and STEM experiences, is important, but more so is the ability to harness the diverse skill sets of a group to accomplish complex projects.

I have no clue what circles I will find myself in in the future. But I walked out of the program realizing that whatever I choose, I should love it. I should have the freedom to be creative and ambitious. And I should be around people as dedicated and talented as SEES interns.

Photos (top to bottom): Noah, third from left, and his group during their poster presentation: Examining ICESat and Intercampaign Bias; Noah's intern group posing before the Saturn V rocket during a field trip to the Johnson Space Center in Houston.