From May 31 to June 5, Pingry Middle Schoolers were given permission to shed their identities as students and, instead, assume many others—they were political canvassers, escape room artists, physicists, fashionistas, inventors, thought leaders, collaborators, activists, change agents, boat builders, and the enthusiastic subjects of science experiments involving flying rice krispies, to name but a few.

Breaking out of the classroom to dive in to different experiences and hands-on endeavors is precisely the spirit of Project Week, launched last spring in the Middle School to replace final exams with more lasting, experiential learning.

As was the case last year, Grade 6 activities centered around STEAM.

Form I—the soon-to-be "heads" of the Middle School—engaged in an array of projects and met off-campus with community leaders to better understand effective leadership skills. At week's end, they gave a series of persuasive presentations on a Pingry-specific topic of their passion, including the Dress Code, student printing rights, recess, and Advisories. (As a direct result of last year's Form I presentations, and as a lesson in the ways in which change can be affected in a community, a gaga pit was installed outside on the Middle School lawn this school year, to the students' great delight.) 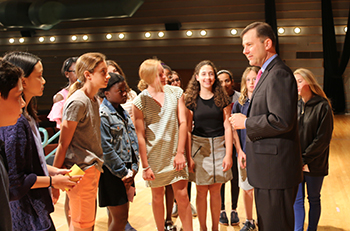 Finally, after engaging with several politicians as well as a lobbyist, Form II students researched and debated one of four newsworthy, New Jersey issues (an expanded selection from last year, when all groups dove into the PennEast Pipeline debate): minimum wage, the legalization of sports betting, gun regulation, or vaping. At the end of the week, each group created a Public Service Announcement (PSA) detailing the issue at hand and their position on it.

By all accounts, the second annual event was just as successful and well received as the first.

"My biggest takeaway from Project Week is that it doesn't matter how young or old you are to create change, but what matters in your determination and willingness to make that change happen. . . if you work together with a team you can accomplish things and influence the community around you," said Anika Sinha '24. "Unlike finals or exams, [Project Week] gives more than one perspective on real-life situations and adds an interactive, more meaningful experience."

As Middle School Director Laurie Piette noted, "Students had the chance to experience authentic, interdisciplinary topics and learned ways that even a Middle Schooler can make a difference." Below, a few of the highlights: 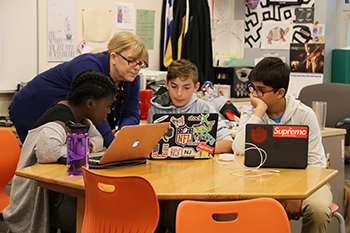 • Grade 6: Thanks to the support of the PSPA STEAM Committee, a team from the Liberty Science Center traveled to Pingry to perform a science circus for students. All 90 sixth graders sat on the edge of their seats, eagerly volunteering to serve as subjects in a variety of experiments involving the study of electricity (including rice krispies flying off of outstretched palms). They also learned the answer to the question, "How much does air weigh?" (15 pounds per squash inch, if you were curious.)

• Form I: State senator Thomas Kean '86 discussed leadership with students. "Leadership is consistency in how you act" and "how you build, create, and work with others," he said. "There is no downside to failing," he added. "You win, you lose, you move on. The question is how you move on. There is always the next challenge."

• Form II: Steve Elmendorf '78, a lobbyist and former deputy campaign manager for U.S. Senator John Kerry, shared with students the ins and outs of navigating the political system. "Stay engaged," he encouraged students. "Ask yourself, 'What can I do'"?

• Grade 6: The Great Egg Drop! Matching last year's decibel level of glee, groups of students let fall their cushioned egg contraptions from the heights of the Upper and Lower Commons. Finalists moved on to the roof above the Middle School atrium, where, on a clear, crisp spring afternoon, eggs dropped lazily against a backdrop of puffy white clouds—and all survived their landing! Team Awards were given for the most aesthetic, the longest air time, and the egg contraption to reach the highest height with the lowest mass.

• Form I: Tami Steckler, former COO of the Legal Aid Society of New York City and consultant to the SOMA Center for Peace and Justice, and Elizabeth Aaron, MAT, M.Ed., Principal on Special Assignment for the South Orange/Maplewood School District, spoke to students about key leadership qualities: "Collaborate. . . get out of the way to make sure the person least likely to contribute has a voice," she said. "Lead by example. . . do anything that you ask of others. . . set goals, and strive for better."

• Form II: Students broke into three groups and prepared for a busy day! Group 1 engaged in a presentation with Jack Ciattarelli, a former member of the New Jersey General Assembly and frontrunner for the 2021 state Republican gubernatorial nomination. Group 2 heard from Mitchelle Durlis, the district director for New Jersey Democratic Congressman Tom Malinowski. In the afternoon, both groups hopped on buses to canvas residents in Morristown and Somerville on their four focus issues: gun control, vaping, minimum wage, and legalization of sports betting. Group 3, which broke into two further groups, traveled to Rutgers University to visit either their School of Public Health (meeting with professors to study the effects of vaping and gun violence) or their School of Social Work (meeting with professors at the Center for Gambling Studies). Alexis Matthews '24, who went canvassing in Somerville, commented, "I was surprised how few people were informed about New Jersey issues like sports betting." 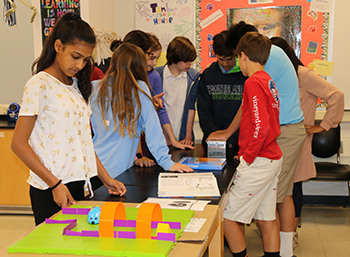 • Grade 6: A Jedi knight abducted Pingry's beloved canine goose chaser, Finn, from the Bear Pause. Challenge: students, broken into three groups, had 45 minutes to solve a series of intricate problems, and avoid well-placed decoys, in order to locate ransom money and rescue him! The challenge—an educational escape room—was the brainchild of science teacher Debra Tambor, who, along with fellow teachers Donna Thau, Shauna Leffler, and Nicole Cabral, designed the first-time event for students.

• Form I: Field trips! Breaking into three groups, some students traveled to the New Jersey Institute of Technology to visit the physics laboratory of Dr. Gordon A. Thomas and learn about leadership and administration in science and higher education. Another group traveled to the Municipal Court of Bridgewater to meet the Honorable William T. Kelleher, Jr., Presiding Judge. A final group headed to Maplewood Town Hall to see Elizabeth Aaron in action, as well as the town's Public Health Supervisor, Candice Davenport. 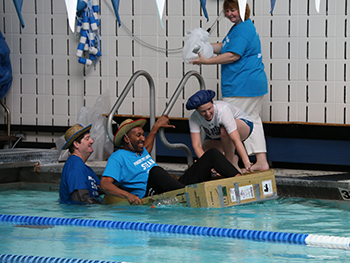 • Form I: In groups, students presented their recommendations on a Pingry-specific issue of their choosing to a panel of faculty judges. Stakeholders rated the presentations on the basis of such factors as organization, clarity, addressing counterarguments, creativity, participation, and delivery. Aanya Shah '24, Jada Watson '24, Theo Strelecky '24, Martin Fields '24, and Ngozi Nnaeto '24 earned the highest average score, presenting on "Snack in the Middle School." Members of the Middle School Administration plan to review their recommendations and announce what changes will be implemented in the fall.