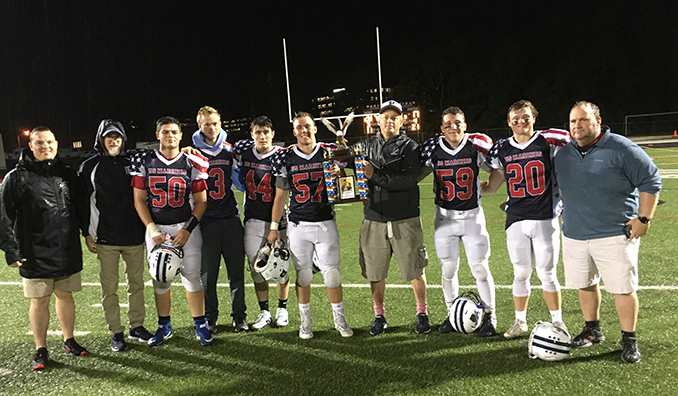 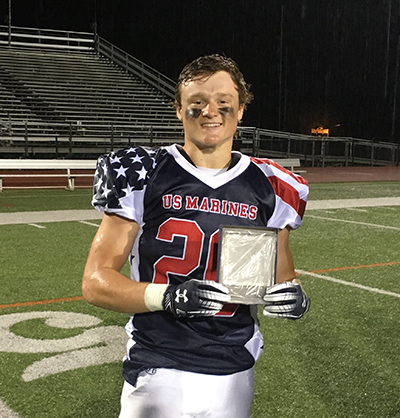 Sponsored by the United States Marine Corps (USMC) and the Somerset County Football Coaches Association, the Basilone Bowl is a post-season, all-star game comprised of over 80 recently-graduated seniors from Somerset County's 13 football-playing schools, as well as Delaware Valley Regional High School in Hunterdon County. The game is a tribute to Raritan borough's Gunnery Sgt. John Basilone, the only enlisted Marine to receive the Medal of Honor and Navy Cross in World War II. He was killed in combat on Iwo Jima 70 years ago in February. Active-duty marines watched the game from the sidelines, and during half-time festivities, more than two-dozen USMC recruits took to the field to reaffirm their commitment of service.

In recognition of Basilone's heroism, players are chosen by the Coaches Association for their athletic ability, scholastic performance, and content of character, and Pingry was proud to showcase six of its own.

A highlight of the game is the opportunity for the boys to compete alongside players who, during the regular season, are their opponents. The Devil Dogs, to which the Big Blue players and coaches were assigned, and the Leather Necks—both well-known nicknames in the Marines—went head to head. And the Devil Dogs (led by Coach Shilts) emerged victorious, defeating their opponent, 28-17. Nate Hefner '19 (right) was named Most Valuable Offensive Players for the Devil Dogs.

"It's always an honor to be a part this great event, an event that forces us to think of the wider world that's so much bigger than us," said Coach Shilts. "It's a blast working with coaches of character and enthusiastic student athletes from around the county. I'm very proud of how the Pingry guys played. To be a small school and to be well-represented is one thing, but to have everyone lend a hand and play so well is extra special. And, yeah, it was cool to win."

Read these NJ.com and MyJerseyCentral articles for more details on the game.