After a somewhat slow start to the season, the Boys' Varsity Tennis Team, currently 11-5, is on a roll, according to Head Coach Marion Weber. 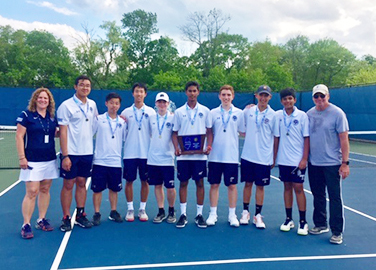 The stats: Since April 23, they have gone undefeated. In the Somerset County Tournament on May 1, the first doubles team of Luke Ittycheria '19 (a co-captain) and Walker Johnson '21 advanced to the finals, and the team took third overall. In a two-week span beginning on May 7, they swept all flights in separate matches against North Hunterdon, Peddie, and Moorestown Friends, 5-0. On May 18, in the Prep A Tournament, the team placed second to Lawrenceville, with Hugh Zhang '21 in first singles and Ryder Stine '21 in third singles both giving strong performances in the finals. First and second doubles teams Luke/Walker and Chris Yu '19 (co-captain) and Connor Chen '22 also advanced to the finals.

Congratulations, and good luck at the Group Championships!