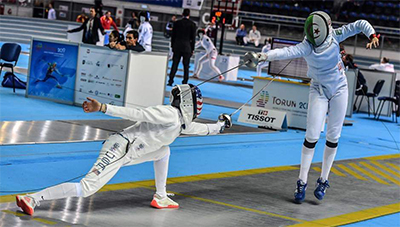 "There were 118 fencers in this event, and it was a Cadet event, which means competitors aged 17 years or younger are allowed to participate," explains Jessica. "I was really excited to fence people from all over the world, which included competitors from countries I had not seen at previous World Cups. Overall, I gained a lot of fencing experience from this tournament and learned a lot. I'm very happy that my hard work over the past year has paid off, and I'm very grateful for the support from the Pingry's Fencing Team and coaches, and my club coach, Yakov Danilenko. I had a lot of fun fencing for Team USA, and hopefully, I would like to qualify again next year to attend the 2020 World Championships, which will be held in Salt Lake City, Utah."