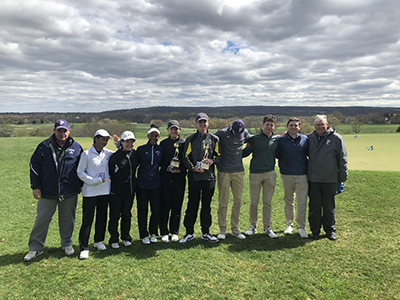 In one of their first major tournaments of the season, Pingry golfers proved they'll be a force to be reckoned with this season. Repeating their feat from two years ago, both the Boys' and Girls' Varsity Teams took top honors at the Neshanic Valley Golf Course on Monday.

After a third-place finish last year, the boys' team overtook Gill St. Bernard's and Watchung Hills by 14 strokes to earn their first-place finish. Michael Gallagher '19 won the individual title by seven shots with a round of 70. Hardy Mennen '21 took third with 80, and James Pagano '20 had an 82. New to the team this season, Head Coach Mark McAvoy was proud of their performance. "I have a good group of boys who play golf as a team, which is hard to do because golf is such an individual sport. Going in, the boys were real confident, expected to win, and they played that way."

After a disappointing fourth-place finish at the Red Devil Invitational on April 8, the girls' team—which went undefeated in 2018 and took the crown at the Tournament of Champions—found their stride, defeating Montgomery by three strokes. Christine Shao '19 placed second with 75, and Zara Jacob '21 placed third, in 78. Ashley Lu '20 and Kathryn Jones '19 rounded out the top four with 88 each. "We are starting to click on all cylinders. Another team with great energy and enthusiasm!" reported Head Coach Rob Mauer.