Among his athletic highlights as a runner at Pingry, Ben Vazquez '18 holds the school record in the 600-meter run (1:24.57), is Pingry's third-fastest male finisher in the 800-meters (1:54.70), and, with a 4:21.17, is among the school's fastest milers ever. Last spring, he took second in the 800 meters at the Non-Public A Championships to advance to both the Meet of Champions and the New Balance Outdoor Nationals in Greensboro, North Carolina. Behind Pingry Hall of Famer Chris Lear '92, Ben is, according to Head Coach of the Boys' Varsity Cross Country Team, Matt Horesta, the second best middle distance runner in Pingry history. Now a freshman runner—both cross country and track—for Connecticut College, Ben has been setting an equally fast pace with the Camels.

You were your team's seventh runner—covering 8,000-meters in 28:09—at the NESCAC Cross Country Championships last fall, where the team placed fifth overall. Not a bad start for a freshman. Was your first season of collegiate cross country what you expected?
It was actually better than I expected. I've always been a track athlete first and foremost— longer distances were never my strong suit at Pingry. But I knew that a successful cross country season would lead to a successful track season. So, I put in the work to do my best for myself and my team. When I got to college, I was worried because the races move up to an 8k [4.9 miles]. The increase in mileage—both in practices and races—was tough. I always had an "off" day in high school. Now, we practice seven days a week, with maybe one day biking or swimming. I also never doubled at Pingry, but in college we have morning and afternoon practices. That schedule was hard to get used to in the beginning, but it has paid off. 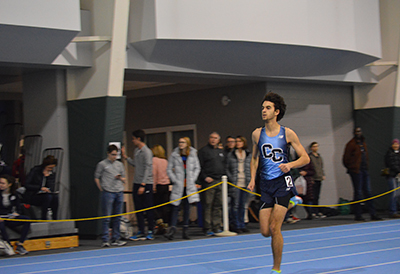 Shifting to the indoor track season, just under your belt, at a Tufts Invitational in late January, you won the 800 meters in a meet record of 1:57.03. Was that an indoor PR?
My performance at the Tufts meet was really surprising. I had no idea it was a meet record until they announced it over the loudspeaker. It wasn't an indoor PR—my 1:55 PR came later in the season—but it was a great time for me at that point in the season. I'm trying a few 1500s at outdoor meets this spring. It's not a high school event so it would be new for me. I'm still young; there's no reason to hammer 800s every meet.

In what ways do you feel Pingry's cross country and track & field programs—and Coaches Horesta and Lear (cross country and outdoor track) and Coach Christensen (indoor track)—prepared you well for competition in college?
In terms of competition, they would always assure me that the workouts I was doing were helpful. They would show me the workouts and times that Liam Mullet '14 and Stewart Wood '14 [Pingry running standouts] were running at my age. Seeing what they were able to run, I knew I had it in me. It also helped that they were interested in my life outside of running; they were interested in how school was going for me. It got my mind off of just practice and competition. I enjoyed getting to visit with Coach Horesta and the team when I was home over Spring Break. While the guys were running during a practice I had a good discussion with him about my college training and how it differs from just a year ago.

Do you keep in touch with former Pingry teammates who went on to run in college, too?
Definitely. My senior year, I would often text Tommy [Tarantino '17, now running for Middlebury College] and Matt [Peacock '17, running for Williams College] to ask them how they were surviving their college seasons. Now, I see them a lot at meets, since we're all in the same conference. We have our own group chat and are always comparing workouts, asking who's running where on any given weekend, that sort of thing. They have been super helpful in telling me to trust myself and trust the workouts my coach gives me. They got the best of me last cross country season, but I think they're more afraid of me for the outdoor track season! At one indoor meet a few months ago, when I ran my 1:55 PR for the 800, Jamie Barker '16 (Haverford College runner), who I also still keep in touch with, was there and came over to congratulate me. I just love keeping in touch with the guys and seeing what they're doing, rooting for them when we're at the same meet.

When you graduate, how would you like to look back on your collegiate career, both academically and athletically?
Athletically, I would love to make Division III National Championships for cross country and track. I think it's definitely a possibility—I need to put in the work and stay healthy. Cross country will be tougher, but just qualifying would be amazing for me. If we could go as a team, that would be an even better accomplishment. We had three individual runners make it last fall, so in the future, it could definitely happen. Academically, I definitely want to study abroad one semester or longer. Connecticut College has a great internship program abroad, and that's something I'd like to do. I want the experience of being in an environment where I'm working and studying and living on my own. I'm considering majoring in International Relations, with a minor in Chinese. At home, my family speaks Spanish, so I already know English, Spanish, and I took several years of Mandarin at Pingry. They're the three most spoken languages in the world, so I think being fluent in all three would give me an advantage.

Best piece of advice for a current Pingry student considering pursuing athletics in college?
Try not to get so caught up in the moment. My senior year, I was so focused on trying to qualify for Nationals—it was coming down to the last two meets—that it was making me ignore other aspects of school life. It was really a weight on my shoulders. If athletics are something you really want to pursue, it's important that you also have other interests or activities that keep you balanced. Also, when talking to college coaches, be honest with them about what you want to do they will show you the same honesty. At the end of the day, finding a school that's the right fit both academically and athletically is most important.