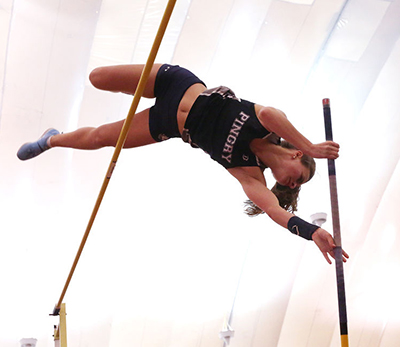 Exactly two years ago, pole vaulting phenom Julia Dannenbaum '17, who has since taken her talents to Washington University in St. Louis, was at the height, literally, of her high school career. She had just won the NJSIAA Non-Public B state title in her event and, by clearing 12' to take first at Meet of Champions (MOCs), became the first Pingry female track & field athlete to claim an individual win at the coveted, all-state championship. Earning secondary recognition at the meet was her younger sister, Caroline '20, who cleared 11'6" to place sixth—not a bad start for a freshman.

Last weekend, after three years of hard work to hone her vertical craft—not to mention several "off" months this past fall spent rehabbing a herniated disc—Caroline joined her older sister as an MOC pole vaulting champion. And she did it by bettering Julia's vault by six inches. Clearing 12'6", she equaled the school indoor record her sister currently holds (Caroline holds the outdoor record of 13') and tied the MOC meet record (only four other girls have cleared 12'6" in the meet's history).

"Julia has been an amazing role model. Watching her work hard and succeed made me want to do the same thing," said Caroline. "I also love the way she competes, and I try to represent myself the same way. We have a very healthy competition between us, and we are always pushing each other to improve." Acknowledging her setback last fall, she added, "Being injured was very challenging since I couldn't practice or train for five months while my back healed. I came back mid-season, and have been really pleased by how quickly I returned to form. I think that I have a lot of room for more improvement as I get stronger." 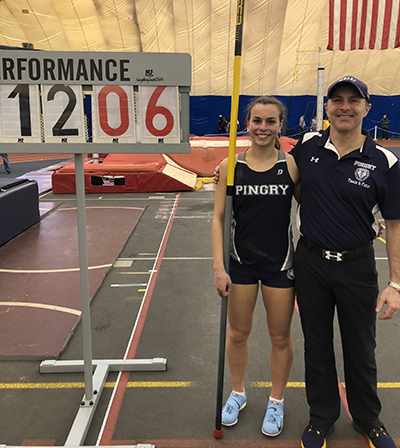 In its recent history, Pingry's Varsity Track & Field program can unarguably boast the development of some serious pole vaulting talent, starting with Angel Fluet '14 (who vaulted for four years at the University of Chicago), Sophia Cortazzo '16 (now vaulting for Johns Hopkins University), and Julia. Of note, at the Non-Public A State Championships two weeks ago, following Caroline, who again took first, were freshman Barlow Clark-Schoeb in third (10'6") and Carol Ann Perry '20 in fifth (10'). The three vaulters helped Big Blue to a third-place finish overall at the meet. That three Pingry athletes are competing in such a specialized event—not to mention that all three cracked the top five in the state—is impressive, to say the least.

"We would not have been able to do any of this without our amazing volunteer coach, Mark Cortazzo P '15, '16," said Caroline. "He is the president of the United States Pole Vault Association, he's incredibly knowledgeable and passionate about the sport, and he always goes above and beyond for all of us."

Also in MOC action over the weekend, Nicole Vanasse '20, who won the 3200-meter run at the state group championships two weeks ago—and won the event at MOCs last year, in a school record of 10:34—took silver (10:39).

• Read more about Caroline's gold-medal performance at MOCs.
• Read about the pole vaulting exploits of Sophia Cortazzo '16 and Julia Dannenbaum '17 during their years at Pingry.