Since their opening game on December 1—during which they rolled to a win over Watchung Hills, 4-1—the Boys' Varsity Ice Hockey Team has had a dominating season. Up until last Tuesday, when they succumbed to their conference rival, Ridge, in a hard-fought 2-3 (they defeated them earlier in the season), they reveled in an undefeated 13-0. Now, at 14-2, and thanks to a win over Hillsborough on the 18th, they have secured the Skyland Conference Championship. 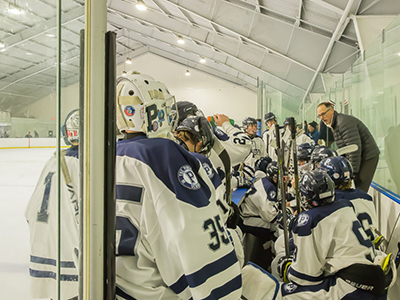 "The fact that we're taking first in the conference is a big deal," says Head Coach Scott Garrow. And he's right. Five years ago, Big Blue finished last. Ridge has taken top honors for the last several years, and topped Pingry in both the conference and Skyland Cup titles last year.

Success has been a true team effort, reports Coach Garrow, and it has occurred despite losing some key players to graduation, including Austin Parsons '18 and George Enman '18. "We have a lot of really good players—four seniors and many strong younger players—not one superstar. That's why we can beat a lot of the other teams who might relsy on a single talented player," he says.

Ranked #15 in the state, Big Blue is looking ahead to their last three games of the regular season, and a chance to claim the Skyland Cup title over Presidents Day Weekend. Last winter (14-5-1), they advanced to the finals before falling to Ridge; they are hungry—and ready—for redemption this year.

Read more about the team's victory over Hillsborough last week.

Congratulations, Big Blue, and good luck in the Skyland Cup!