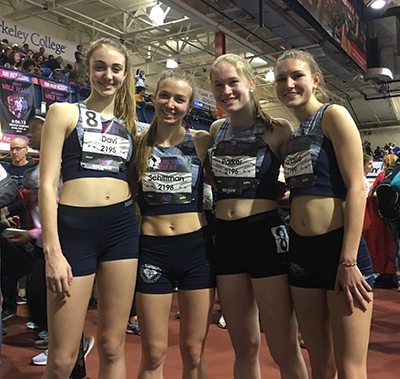 Last season's highlights:
The Varsity Winter Track Team had a record-breaking season under captains Ben Vazquez '18, Tyler Williams '18, Avery Schiffman '18, and Anna Wood '18. Highlights included the girls' 4x800-meter relay team of Nicole Vanasse '20, Avery Schiffman '18, Cathleen Parker '19, and Ryan Davi '21, who qualified for and finished an impressive ninth at New Balance Indoor Nationals in early March, running 9:15.05 and breaking a school record they set a week earlier at Eastern States Championship. Also qualifying for the prestigious national meet were pole vaulters Caroline Dannenbaum '20, who placed sixth at Meet of Champions in late February, and Carol Ann Perry '20, who placed 11th. Also at MOCs, Nicole won the 3200 meters in a PR and school record of 10:34, securing a #3 national ranking in the event. Ryan took second in the 800-meter run in a school-record time of 2:12. And, for the third time that season, the 4x400-meter relay team of Cathleen, Kierstyn Brown '20, Avery, and Ryan broke the school record in the 4x400, running 4:04 to finish ninth in the state. In team results, Big Blue girls placed second to powerhouse Union Catholic in the NJSIAA Non-Public A State Championships, and tied Lawrenceville for first in the Prep Championships.

For much more detail on these achievements and more, read last year's article about Eastern State Championships and MOCs, as well as an article recapping the beginning of the season. 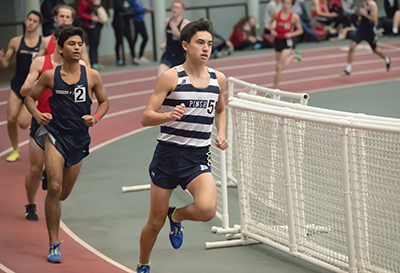 What to watch for this season:
• Head Coach Christopher Shilts and captains Cathleen Parker '19, Ally Lima '19, Joe Shilts '19, and Nick Robinson '19 will guide a roster of 34 athletes—nine boys and 25 girls. This includes three senior boys and six senior girls.

• On the girls' team, look for all of last year's record-breakers to make an impact again.  Cathleen, who broke the school record in the 600 meters at the Bishop Loughlin Games two weeks ago, as well as freshman Alina Irvine '22, who had a strong cross country season, are also individuals to watch. Also watch for hurdlers Dylan Anidjar '20 and Alexandra Lima '19, and sprinters Kierstyn Brown '20 and Lauren Taylor '20.

• On the boys' team, Henry Wood '21 and Joe Shilts '19, who has broken his own record in the 300 meters already this season, as well as Thomas Drzik '19, who had a strong cross country season, are runners to watch.

• Union Catholic is becoming one of Big Blue's new rivals, now that the team moved to the Non-Public A division. Although Pingry has not defeated them yet, Coach Shilts acknowledges that they're getting closer each year.

• Coach Shilts's main goals for this year is to maintain the dignity of the sport by ensuring that his team is involved and committed, as well as encouraging his athletes to focus on their health and not dwell on mistakes or get caught up in last year's results.

• Next up for the team is a meet against Lawrenceville on January 12.


Full-court press:
"We want to foster great respect for track and field, as well as for each other; we want to have a daily commitment to focus on the daily grind, and allow the big picture to follow as it must. The process leads; the result takes care of itself."—Head Coach Shilts