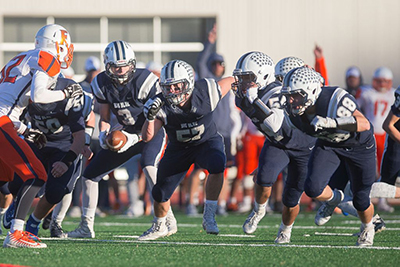 In a decisive comeback after a 27-26 loss against the Eagles just weeks earlier, Big Blue (4-5) pulled out a 27-14 victory over Fieldston on November 3, earning a third-place finish in the MIFL (Metropolitan Independent Football League) playoffs, behind Rye Country Day and Poly Prep. Notching a win over a team that had defeated them twice before by only one point felt good, says Head Coach Chris Shilts, and was a sign of positivity as the team neared the end of a tough season. "It was also good to give our seniors—Kyle Aanstoots, Jake Austin, Jack Baulig, Zach Dobson, Brian Benson, Thomas Campbell, Joe Shilts, Nate Hefner, and Peter Nicoletti—a win in their final game at home," he added.

Earlier in the season, Big Blue defeated non-league team Newark Academy (42-0) and Morristown-Beard (51-20), as well as Montclair Kimberley Academy (20-0) on Friday Night Lights. The MKA victory clinched a New Jersey division win for them—a goal of theirs heading into the season, their second in the MIFL—and advanced the team to the MIFL playoffs (they fell to Poly Prep on October 26).

"Although we didn't accomplish all we set out to do this season, I am proud of the fact that our seniors saved football at Pingry, and that's huge. They were asked to change the culture of the program, and they did that."