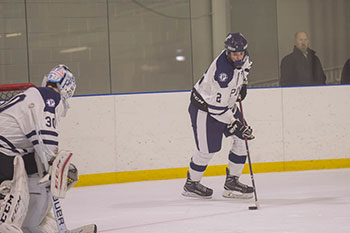 Senior defenseman Austin Parsons was one of seven ice hockey players from across the state recently named a New Jersey Devils High School Player of the Month for November/December 2017. A four-year varsity player and co-captain this year for Big Blue, he has been a critical component of the team's impressive 8-1-1 season start.

"Austin has a presence about him when he's on the ice. You know he's one of the better players," said Scott Garrow, who assumed the role of Head Coach of the Boys' Varsity Ice Hockey Team two years ago, and has watched Austin mature ever since. "He gets points on the offensive end and shuts down opponents on the defensive end, and he's a great teammate, really helping the younger guys on the team."

The ice hockey standout is also a track & field standout. Last spring, he placed fifth in the javelin event at the Meet of Champions with a throw of 193'05, the second-farthest throw in Pingry's history. He was also one of four Big Blue track & field athletes to compete at New Balance Nationals Outdoor last June, where he took tenth overall in the javelin.

Austin is headed to the University of Notre Dame next fall, and will throw the javelin for the Fighting Irish.