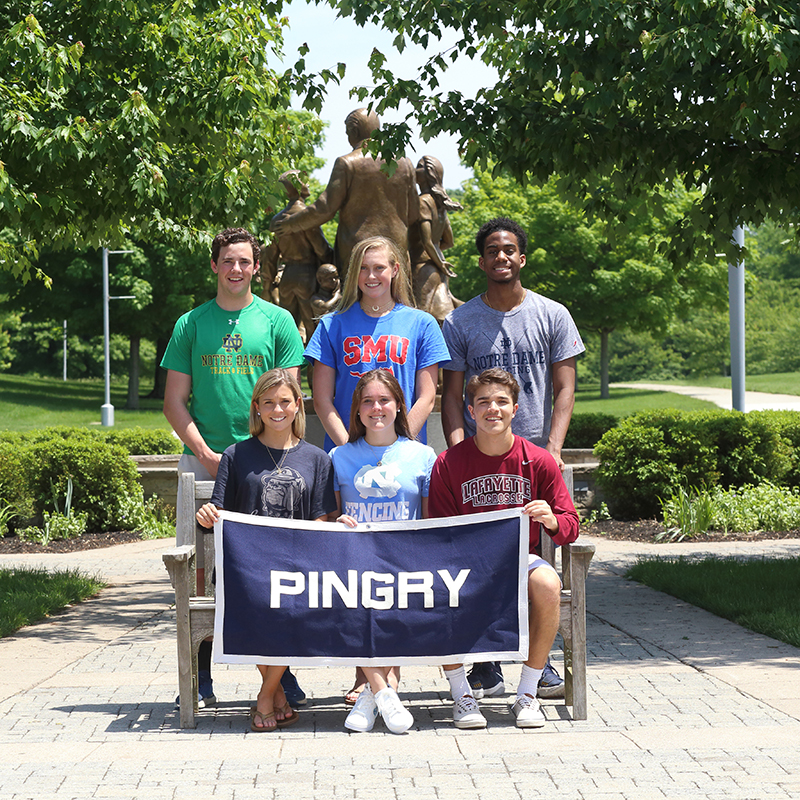 Kicking off the National Letter of Intent (NLI) signing season, six Pingry seniors recently marked their formal commitment to pursue their education and athletic careers at top Division I schools. An additional 25 college-bound athletes from Pingry—spanning 14 teams—look forward to competing for Ivy League and Division III teams and are awaiting their December early decisions.

We look forward to updating the Pingry community in the spring with the full list of college-bound athletes. In the meantime, if you're curious, read last year's article, in which 26 student-athletes headed to college teams.

The six NLI signers are as follows:

George Enman—Lafayette College—Lacrosse
A lacrosse starter since his sophomore year, Enman has been integral to Big Blue's three consecutive state championships. Last year, he led the team in points and was named to the  All-Skyland Conference First Team and the All-State Second Team. He was also named the team's offensive MVP. Enman also plays ice hockey for Big Blue, captaining the team his junior and senior years.

"George is a highly competitive athlete who has enjoyed considerable success in the last few years. He will graduate as one of our all-time leading scorers. I have enjoyed coaching him for his skill, leadership, and toughness."—Mike Webster, Head Coach of the Boys' Varsity Lacrosse Team


Malcolm Fields—University of Notre Dame—Fencing
A regular fixture at USFA (United State Fencing Associations) open competitions, both nationally and internationally, Fields, a sabre fencer, was captain of Big Blue last season and will serve in the same role this upcoming season. Last year, he went undefeated in dual meets, led the team's sabre squad to a second-place finish at the 2017 Cetrulo Tournament, and was named the 2016 Somerset County individual champion. According to Head Coach Ted Li, he is aspiring to become the third Pingry fencer to represent the USA in the Olympics, following Athletics Hall of Fame inductees C. Lee Shelley '74 and Daniel Kellner '94. Outside of Pingry, the nationally ranked fencer practices at Advance Fencing and Fitness Academy in Garwood.

"With his speed, athleticism, and focus, Malcolm has been one of the mainstays of Pingry sabre fencing for the last three years, and as a captain this year, he will certainly contribute to the team's success."—Ted Li, Head Coach of the Varsity Fencing Team

"Mairead has been a leader and contributor on our team for four years. She raises the level of practices and games with her intensity and focus. What an honor for her and for our program for her to be signing this Letter of Intent to Georgetown University."—Carter Abbott, Director of Athletics and Head Coach of Girls' Varsity Lacrosse

Austin Parsons—University of Notre Dame—Track & Field
A four-year varsity track & field team member and upcoming captain, Parsons holds Pingry's record for the second farthest javelin throw in the school's history (193'5"). Last year, he finished fifth in the javelin at Meet of Champions, second at the Non-Public "A" State Championships, and won the javelin competition at both the Skyland Conference and Somerset County Championships. He is also a three-year member of Big Blue's football and ice hockey teams.

"Sophia is the type of jumper that gets better and stronger year after year. She is a key point scorer in all three of her events for our track team since her freshman year and has anchored our team numerous times to state titles. As the top jumper in the state last year, she will leave behind huge shoes to fill. I can't wait to see what she does next at SMU."—Nancy Romano, Assistant Coach of the Track & Field Team