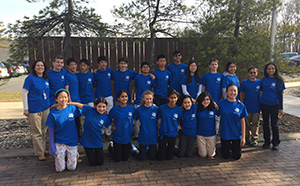 In just their second season, 20 Middle Schoolers from the Science Olympiad team—led by science teacher Debra Tambor and math teacher Payal Patel—worked diligently from October to March to prepare for the 25 science and technology events they would face in upcoming competitions. At the regional competition in January, the team earned enough points to advance to the state tournament, which took place on March 8 at Middlesex County College.

There, the students medaled in 10 of the 25 events, including third-place finishes in Crime Busters and Green Generation; fourth-place medals in Food Science, Mission Possible, and Scrambler; a fifth-place award in Bottle Rocket; and sixth-place medals in Bio-Blitz, Bridge Building, Meteorology, and Wind Power. Of 26 teams at the competition, Pingry science Olympians placed sixth overall, up from their ninth place last year. During morning meeting on April 4, they presented their trophy to Middle School Director Mr. Cox.

Six months of hard work led them to their achievement—they studied independently and with their teammates, designed and built their devices, and worked with adult mentors to assist them in their preparations. 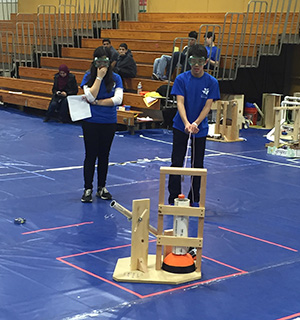 Much effort went into Science Olympiad this season, a great deal was learned, and many were inspired to pursue their interest in science, in the Middle School and beyond.