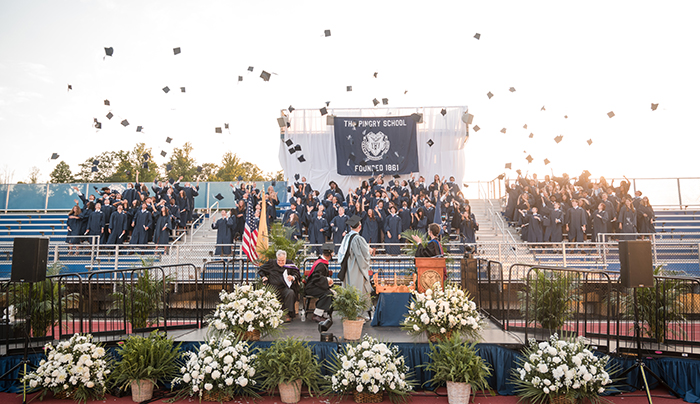 The Class of 2022 received their diplomas during the School's 161st Commencement Exercises, held on Parsons Field on June 13, in the company of families, Pingry trustees, administrators, faculty and staff, and other friends. The students will be continuing their academic careers at 79 colleges and universities.

During his Invocation, senior faculty member Miller Bugliari '52 posed the question, "What will your new chapter say?" Will students be leaders or followers? Will they put to good use the skills they have learned at Pingry?

Class President Ashleigh Provoost, remembering her first-grade teacher's sympathy when her grandfather passed away, asked, "What defines a moment?" Recalling that her memorable moments have stood out because of the people who were part of them, Ashleigh realized that the question really is, "Who defines a moment?" It's about the people, and she encouraged her classmates to thank those people who have been part of the memorable moments in their lives.

Student Body President Giles Burnett addressed the idea of "being a global leader or leader" and the importance of communicating—and relating—to those who follow you. A leader needs to hear people out and consider how to make an impact from whatever their position in life happens to be. "Make someone else a better person, and allow them to make you a better person."

Valedictorian Emmet Houghton spoke about machine learning and AI (artificial intelligence) within the context of the humanities. Pointing out the international conflict and political turmoil of recent years, he said the class needs "to bring change . . . as the world locked down, this class rose up . . . we need to rewrite the code [that] the system has been operating under."

Board of Trustees Chair Ian Shrank '71 presented The Cyril and Beatrice Baldwin Pingry Family Citizen of the Year Award, given to members of the Pingry family who, in rendering meritorious service to the community, have demonstrated those qualities of responsible citizenship that Pingry aspires to instill in all of those associated with the School. This year's recipients are Kindergarten Teacher Judy Previti and Math Teacher Manny Tramontana ("Trem"). Ms. Previti has completed her 18th year at Pingry and is known for the tradition of decorating gingerbread houses, singing, playing the guitar, and teaching American Sign Language. Mr. Tramontana is stepping away from the classroom after 58 years but will continue to be involved with the School; his career has included developing the Upper School math curriculum (especially Math 6), serving as Math Department Chair for 30 years, serving as Head Coach of the Varsity Baseball Team for over 30 years, and being inducted into Pingry's Athletics Hall of Fame.

Pingry Alumni Association President Kevin Schmidt '98 presented the Letter-In-Life Award, Pingry's highest honor for a graduate who has earned distinction and achievement in his or her professional life and, by doing so, has brought honor to Pingry. The award is given at Commencement, in front of the newest members of the PAA, to recognize the person's achievements and encourage the graduates to pursue their potential. This year's recipient is Anne DeLaney '79, a licensed clinical social worker, philanthropist, and former Pingry trustee who has had a profound impact on the School.

Head of School Matt Levinson paid tribute to the 24 seniors who entered Pingry in Kindergarten (members of the "13 Year Club," or "Lifers"). He then presented Jack Martin with the Magistri Laudandi Award, for being the student who champions the greater good and cares the most about helping all succeed, and Giles Burnett with The Class of 1902 Emblem Award, for having the greatest amount of school spirit.

Addressing the graduates, Mr. Shrank commented on Pingry "prepping" students for college and life and mentioned the beginning of Pingry's identity project. Taking these ideas into consideration, he posed this question to the graduates: "Who do you want to be, and how do you get there?" He followed up with another question (inspired by "To Thine Own Self Be True"): "How to be true to yourself when you don't know the answers to those questions?" His answer—don't worry if you don't know, and don't be afraid to change. Pingry has "prepped" you.

After the presentation of diplomas, Mr. Levinson pointed out that the students will need to decide which courses to take in college. Should they take certain courses? He did, based on advice from his grandmother and advisor, but he didn't feel any passion or connection in those courses. Instead, upperclassmen recommended finding the great teachers, and one professor, in particular, made all the difference for him. Mr. Levinson's advice to Pingry's newest alumni: "Take classes of interest, and ask who the great teachers are."

Pingry congratulates every member of Pingry's Class of 2022 on their graduation, and on all of their accomplishments. The School has a richer legacy because of their talents and contributions, and wishes them luck as they begin a new chapter of their lives. Keep in touch!

Photo Gallery from the Commencement Ceremony

College Selections for the Class of 2022